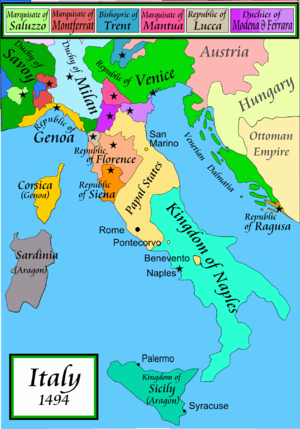 A strategic location, the city was the bulwark of the Romans due to its location in the northwestern corner of the country. It was one of the earliest city states to arise during the mid-medieval period of the 11th century. But as politics go, the city witnessed a struggle between factions that led to foreign intervention and led the city to become the center of a dukedom.

As we said, the city, or rather with the region that went with it – was hotly contested because of its location. Fought over by the French, Spanish and Austrians in the 1400-1500s, the city changed hands many times over. But by far one of the most intriguing conflict was one amongst the Italians themselves – the wars of Lombardy. Between Venice and her allies (read our journeys there) and the Milanese duchy, the wars raged back and forth. 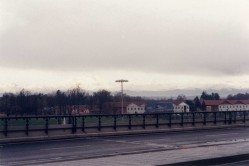 So, the history of the city was one of tragedy. But then after WWII there was immense internal migration to the city and it was rejuvenated. Today we are most familiar with the fashion houses that arose in the 1980s and led Milan’s becoming fashion capital in the world. Milan also became a trendy place to visit and tourism grew rapidly. Hence it is no surprise that we visited this city not once a couple of times!

Coming to Milan will not count if you had not been to the Plaza Duomo and ascended to the top of the cathedral for a view of the old town. The square around it is large and spacious, providing ample space for one to soak in the views of this venerable old dame that was constructed from the late 1300s.

While one can climb the stairs, we found the lift to take us to the roof, having learned from our Barcelona (Sagrada) episode. From the top of the Duomo, we could see over most of central Milan. 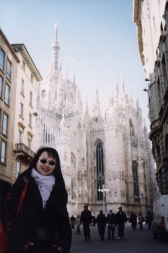 The city does not seem to have any tall buildings as it seems that all that surrounds the Duomo are low rise. Perhaps this is kind of like the Parisian thing with limiting buildings from blocking views of the Eiffel.

While on top, we can roam about quite freely to admire the architecture that is put into making the cathedral. The effort that was put into building the Duomo was indeed very intricate – see the spires? They run all around the roof of the Duomo. Imagine the amount of time the artisans would have to spend suspended up high to carve them!

Perhaps not as aged though next to the Duomo is yet another of Milan’s marvels. 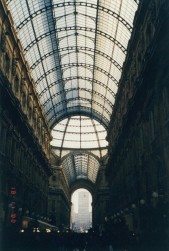 The Galleria Galleria Vittorio Emanuele II is the one of the world’s oldest shopping malls. This cast iron glass vaulted arcade was built between 1865-77 and home to haute couture, jewellery and a great number of restaurants. The ambience of having a meal here in the evening cannot be easily described. It is a little pricier (we can confirm) but one cannot take a miss visiting this place. It would be a real shame. 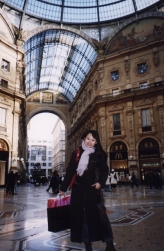 Shopping in Milan is a godsend for the lady folk, as there are said to be >6000 sales outlets in the city! And this was the cited number back in the early 2000s… The brands that are here are too numerous to count and can be the subject of a different article in the future if we ever come to it.

As Milan was the capital of a very rich Duchy, the financial backing is readily available through the rich families that vied to control the country. However, in the last two centuries, the city had been dominated by the Habsburgs and French Bourbons. And how can one ignore the

While you are here, enjoy a piece of history with a visit to the castle of the Sforzas, a military noble family that ruled the city from the mid-1400s. It is now part of a public garden park and on weekend such as when we were there, it was very crowded with families and couples spending a lazy afternoon. It is here that a pigeon slammed into Melvin while it was trying to fly away. Sheesh, what luck though no one seemed to have seen it since it happened so quickly! That, is the reason Mel does not want to go back. 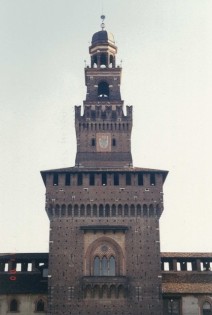 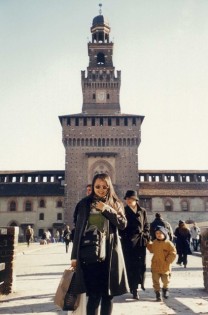 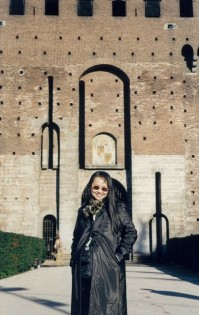 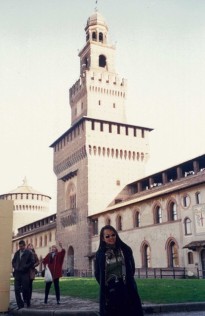 First, a little history. As with all city states in Italy (or even Germany), Milan experienced periods of ‘dynastic’ rule. While the actual construct of the city state was that of a republic, in reality it was frequently dominated by the strongest of the noble families. The Sforza was one such family that hailed from rural origins, coming to power through mercenary services. 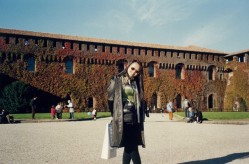 You need to know that in the middle ages there were no standing armies. Professional mercenaries were hired as required (Condottieri as it is called in Italy of old) and may change sides as the flow of money changed.

The fortress was originally constructed in the mid-1300s. Destroyed, it was rebuilt in the mid-1400s when the Sforza family gained supremacy over the city. As with most wealthy medieval lords, the Sforza were the patrons of the arts, commissioning the likes of Leonardo da Vinci to paint frescoes in their domains. 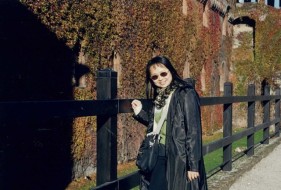 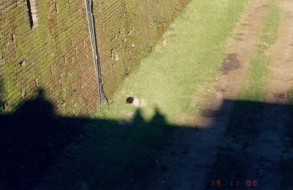 Of course today much of what the castle was had changed since the time the Sforza rulers. It’s original immense size was mostly destroyed or removed in the centuries after the demise of the Sforza. In fact this “dynasty” only lasted 80+ years. The intrigues of politics can lead to a quick demise of an entire family…

For us the main attraction was the Torre del Filarete. It rises up in the center of the 700x700m square castle area, in front of which is a former parade square. On all sides one can visit a few museums now housed here and a whole day can be easily spent here.

So there you have it.

Unlike Rome, Milan does not boasts of numerous Roman era monuments. But it is rich in both medieval history and modern chic. A beautiful combination we think. The location itself is a draw too. For as one flies to the city, one cannot help to notice the Alps well to the north of the city. In fact, one can still see them, especially at Malpensa airport!

So one comes here not to be awed by the antiquities. We spent some days here. And would we come back? Oh yes without skipping a heartbeat.

3 thoughts on “Milan the fashionable”