This was an 8D/7N tour package that we took with ChanBrothers.

The bitter cold of northeast China was frontier land and a much fought over area between imperial China and Russia in the 17th century and later with Japan. Today, it has emerged from its industrial rust belt stigma to offer tourists a taste of the snow and ice.

The start and end point of the 8 days will be the same – the city of Harbin. Because there is no direct flights into Harbin from Singapore, we had to fly in via Beijing. And run the gauntlet of catching the connecting flights in time. Consider that one needs to get through immigration first and then pick up the luggage to recheck-in at the domestic terminal.

Harbin is about slightly over a thousand kilometers from Beijing and the domestic flight alone takes about 2 hours.

First, it was damn good luck on our side. The flight arrived on time and we all (41 folks) made it through customs quickly. Therefore, it was no hassle at all to get to Harbin.

Being here for the first day after an overnight flight, most folks were tired. But this did not mean we had it easy. The frozen river was certainly the highlight for us, as we had not seen much of this in Holland when we lived here (warm winters we were told). The sight of people skating and tubing on the river was fabulous!

The tour package also helped bring us to a local winter wear shop, so that those who are in need can make that last minute purchase. Because where we are headed the next couple of days, there will be exceedingly little in the way of apparel shopping and if available they will be probably exorbitant…

At the end of the day, we had a beautiful seafood buffet dinner. Hey it’s Christmas and we certainly did not miss out here with delicacies such as braised sea cucumbers, abalone and even lobster! All washed down with complimentary wine, it was a hearty way to sleep through the night.

It was indeed a great day. Blue and clear skies, little if no crowds. We did not know this then, but Suan noted at the end of the tour that quite some members of the tour had cuts and bruises, which they said was incurred when they were at the snow sculpture exhibition. 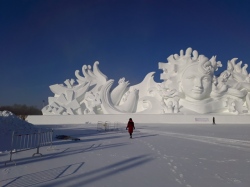 And it’s no wonder. The paths were partly icy and thus slippery. Being the first day in winter wonderland, it is inevitable that people from the tropics are little less careful.

So, exercise caution when you are here.

The wonderful thing as we mentioned earlier in the essay is being here early. Both in the day as well as before the official opening. Coming earlier in the morning is definitely a plus, before more folks come in. And watching the artisans work on the snow moulds is such a privilege. You see how much effort is put into carving these humongous works of art!

We have left behind the comforts of the city and are now ~200km away. It has been noticeably colder, the negative reading on the thermometer going into double digits. Especially in the morning when we first get on the coach – it’s more than freezing! But the scene outside of the coach makes for beautiful pictures and we were quite glued to the window, though many slept through.

The rest stop was an experience in itself. First there are the vendors and the colorful fruits and dried pheasants displayed in the cold. What a way to do shopping… then there was the mad scramble for the toilets. You cannot imagine how chaotic it was. Anyway, visualize it in your heads on your own.

In the old days this was the frontier land. How people survive winter here back in the day is incredible. Just look at the homes they have (said to be still living in them). Learned something new too, birch trees with “eyes”… heheh.

It seemed that not many went skiing. And to be fair, it wouldn’t have been conducive in the sense that there was only a window of 2 hours for “enthusiasts” to get into gear and head up the slopes. Provided you already knew how to ski. So for newbies it was rather tight scheduling considering we were leaving at 1030am.

The optional activity we had today was a mix bag of disappointment and surprising pleasantness. Definitely did not expect to see Siberian tigers but that was really awesome though they were all behind cages…

And the way to Snow Town was indeed fraught with difficulties. Take your own luggage with you and try to squeeze on the mini buses! But the fruits of all that effort pays off in the evening when it is dark. For that is when the town really comes to life! If there one thing not to miss, it is the view over the town with gentle snowing. Mel’s hands were frozen from taking all the photo but the sacrifice was well worth it!

Go on here to read Part II of this journalog.