We know there are a lot of dog lovers out there. But this essay has absolutely, repeat absolutely nothing to do with dogs.

Now honestly, what DO you call the folks who live in Alsace, France? Alsacians? Perhaps. How about Lorraine then? While technically separate, these two regions are often mentioned as one. They, that are nestled cozily between France and Germany were historically contested regions. Not just because of their strategic value, but probably because it was an inheritance dispute (in our opinion). Huh ? we hear you say… let us explain.

You see back in the 800s after Charles the Great (Charlemagne) passed away, he did what most tribal chiefs do; Split the family assets. Since he had three sons, his domains were split into three. France, Germany on the left and right. And right down the middle there was ‘middle Francia’. Smart right? Hey look at the map, it ain’t a small slice of territory in case you are wondering.

Unlike the more homogenous east and west, these folks in the center did not have a common ethnic identity. Adding to the mix, things within the family wasn’t exactly harmonious. Thus this middle ground eventually fragmented into multiple pieces, fought over successively.

Thereupon Alsace and Lorraine were “born”. Well, technically Alsace was part of the Lorraine domain of old. You see how messy this all was!

This essay will start from the northern end and traverse down to the southern end.

For Americans, baseball fans might wonder – hmmm do they (the French in Metz) have a team too? Hehe. Just because Mel follows the sport it does not mean the French do…

A historic city with a long history. It was also an important fortified center, guarding the frontier between France and Germany. On a Sunday that we were here, the town is all closed

except for some small shops from which we bought some Quiche Lorraine! We walked around the old town, which is quite small and virtually empty!

The only area that we spent more time in is around the theatre at Comedy square.

The temple Neuf was the main sight we spent time at. Located next to the opera house, it was all for us to enjoy!

Yes there are other stuff to see, but we eventually tired of walking in a quiet city and made way for Thionville (towards Luxembourg) to see some small chateau. 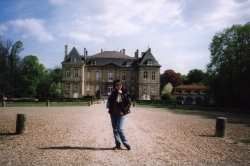 We don’t know if it was private property, but this one’s where got right to the main driveway of the manor house! We seem to have a penchant for ‘gatecrashing’ places and events!

We redeemed a pair of free air tickets on KLM to fly to this city with the same name as a small town in Pennsylvania.

Strasbourg is also the capital of the Alsace region and the cultural melting pot between France and Germany. It is also home of the European parliament, with delegates and interpreters busily supporting them when it is called to session. 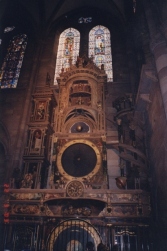 As with most European cities, Strasbourg’s main character is its old town center. The old cathedral (why ah do they call them all Notre Dame?) of the city is was in the progress of being restored when we visited, but the inside houses an astronomical clock and still a nice place to visit. This clock gives a animated light show every day at 12:30pm. Be sure not to miss it! 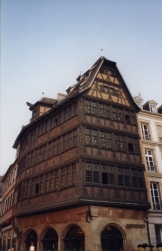 Place Kleber can be considered the center of the old town, and you will find great examples of Alsatian architecture here – a marriage of German and French traditions.

One of the best ways to explore this city is via a cruise around the whole of the center of Strasbourg. We took cruise in the morning along the canals that surround the city. It’s a nice way to get introduced to the city. This helps to define where we would like to go walking later. However, that said the center of the city is really small and you can easily cover it all on foot.

The trams are quick and frequent in the day, which serves well if one’s hotel is located a little further from the old center.

You cannot miss “La Ancienne Douanne” which was the customs and excise point of Strasbourg. You will need to know that in the old days commerce and traffic toll was quite regulated! Today it houses restaurants instead of customs agents but the large premise reminds how this was once a thriving business for government to collect money!

It is a nice short walk along the outer ring canal of the city to the southeastern side. In less than ½ hour, you are in Le Petit France area. In this part of the city, the canal is about 1.8m higher than the other parts and is separated by a lock. As we walk further up, we come up against Barrage Vauban, an old fortification that was built by the French to keep out the Germans.

The Petit France area is also dotted with numerous preserved houses made in Alsatian style which made for excellent backgrounds for photos. Examine the distinctive stripes of wood traversing the face of the houses. They look so pretty!

Food is a must try to and in the Alsace region it is obviously a combination of French and German influences. You get sausages with sauerkraut (the French name is choucroute), as well as Quiche (hmmm…nice). And in the 2 days we stayed, had a lot of Tart flambé, the local specialty that you might mistake for a form pizza. All in, it’s a fabulous place to spend a long weekend!

This has got to be one road trip to remember. It’s late spring and an extended part of our drive along the Moselle river that continued from the town of Saverne. This, after arduously driving through Luxembourg and Metz. We were searching for Alsatian wine first and foremost, but would first encounter Chateau du haut Barr.

It was a rainy day

A beautiful drive to Haut Barr

This remnant of a castle was built in 1100 and served its masters until the end of the thirty years’ war. Today it is shell of its former glory and we did not spend much time here…

Especially not when we are on the hunt for wine. 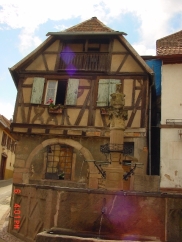 Our first wine stop was obviously at the town of Barr itself. No it’s not a spelling mistake and we did not add the extra ‘r’ in the word. You see, all around this town were vineyards and we had stopped at quite a few of them bagging 13 bottles before we even came to park here for a short walk.

If you keep following the signs that says “route du vin” you’d never be lost – we mean deviate far from wineries. Serving these vineyards are small villages such as Mittelbergheim.

People working the wine industry live here, or at least their family does, we think! There are the usual wood and stone houses. See how the designs are quite similar to those just across the border in Germany.

And just to spice up the drive a little we detoured to Haut Koenigsbourg along the way. This large fortification was built in the 1100s and would see many a conflict in the hundreds of years after its construction. We were at Haut Koenigsbourg at about 5pm and the castle had closed, so only outside views for us! Alsace used to be much fought over. A drive through reveals why. It lies on the border between France and Germany, divided by the Rhine (which is also the international border). 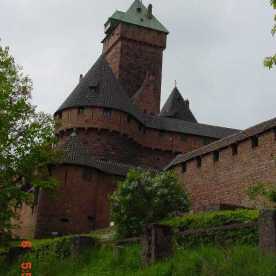 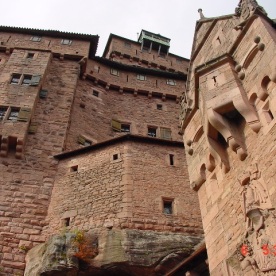 Continuing on the second day we headed first to the scenic village of Eguisheim. This was to avoid the throngs of tourists that would come later. It definitely has a very well preserved old quarter, which makes for wonderful postcard-like photos!

Just as the crowds were arriving, we decided to move on. After a drive around, we continued on to the village of Turckheim driving around the vineyards in its vicinity, searching though not finding the sunflower fields that we read about. 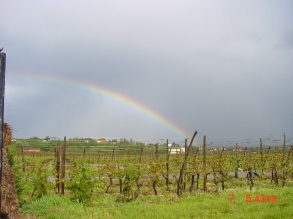 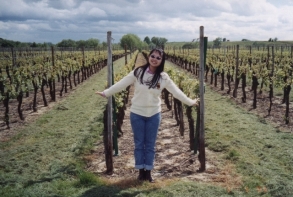 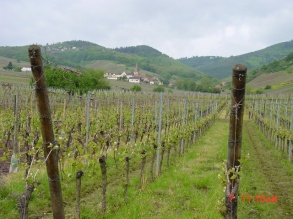 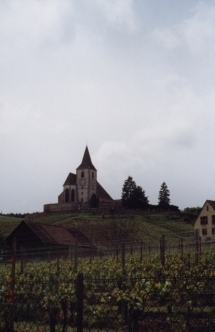 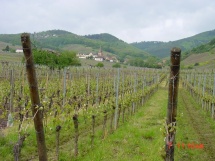 No worries at all! We continued to the village of Riquewihr, but realize it was so crowded

that we continued on and skipped it for Ribeauville instead. We too did not enter the village of Ribeauville that is located on a hilltop, but decided to drive around the vineyards. This is the first time that we really took the time to drive through the vineyards and we wanted to spend most of our time there!

We were then finally able to get into Riquewihr at about 4pm when there were less tourists. We were lucky to be able to have a walk before it rained heavily. It’s definitely quite a touristy town

. The town itself is ringed by an old town wall all around which seemed to have been very well preserved (or restored). Parking here is extremely problematic, with the lots along the perimeters of the town wall full!

That was also the reason that we skipped Riquewihr earlier at lunchtime and went to Ribeauville instead. Cobbled streets line the town, filled with shops and cafes. The architecture here again looks familiar to the ones in the Black forest just across the border. As one of the towns designated on the tourist bus route it is very busy and for that seemed to have lost quite a bit of its charm as a small provincial town!

Colmar was our base on this wine tour of Alsace-Lorraine and it was only fitting that we explore it a little before driving back home. 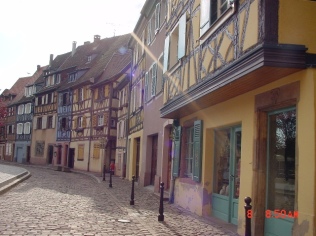 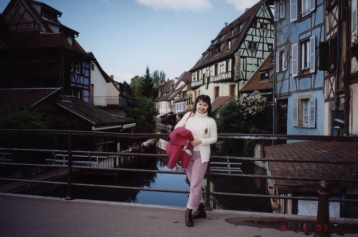 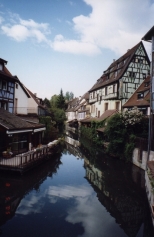 The petit Venice is a smaller version of Petit France in Strasbourg. Like Strasbourg, it has a well preserved old center with charming houses and canals. So you might not miss much if you did not come here in our opinion.

We ended our wine road trip with a drive back north, this time stopping over at the

pottery villages of Souffelenheim and Betchdorf. It does appear that the industry of focus in this part of Alsace is pottery. In Souffelenheim alone there were 20 of them. Final stop, Hunspach where Suan filled up yet more of the grayish hued pottery before we made a long drive back to Amsterdam.

Alsace and Lorraine were contested territories and today they enjoy a peace only interrupted by the hordes of invading tourists. It’s a fun place to combine exploring for wine, history, food and culture. For those fascinated with architecture it can be rich hunting grounds too. Take a road trip here like we did. We are sure you’d enjoy it as much as we did.

5 thoughts on “Of Alsatians and Lorraineans”