For a smaller country within Europe, Holland (or rather the Netherlands) contains a contrast that baffles some. Nestled between the larger cultures of France and Germany, Holland is part of the so-called ‘Low Countries’ (Benelux for short).

Here in the south, it is about 200km from Amsterdam and we normally drive via the A2 all the way southwards.

Maastrict, treaty city of the EU

Holland is also home to one of the oldest cities in Europe with its origins from Roman times. The city of Maastricht is allegedly the oldest in Holland, but some dispute that and place Nijmegan (which did receive Roman city rights that Maastrict never) as older. Whatever the past, it is definitely the birthplace of the European Union. The treat of Maastricht was signed here in 1991 heralding a period of unstability as we now know it.

It was a city that was fought over by many countries in the Middle Ages (France and the powers opposed to it). As a result, the old city has thick ramparts that are still standing after 500 years.

They are made from limestone mined from this region. It is interesting to know that, with its distance from the northern provinces of Holland and proximity with Germany and France, the region known as Limburg has a distinct language or dialect.

In the center of the city is Vrijthof square. In those days when it was built, it would have been the tallest structure in the region if not the entire country! 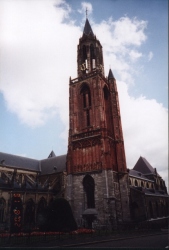 Notice that the base of the basilica is of grayish material – that is the limestone we have been referring to. But the color is not because of different materials being used. Rather it was because of the restorative works in which different paint were used. It was recorded to had been in yellow (18th century) and white in the 19th century.

Aside from the old city quarters with its markets and churches, we ventured further south to,

The Casemates of Sint Pieter’s

The hills (Sint Pietersberg) in the south of Maastricht at Valkenburg are made of limestone. From Maastrict, take a scenic boat ride along the Maas river as we did and save yourself the walking.

You will understand that the main industry of this region has been the mining of the material for use in construction. In fact, until the beginning of the 19th century, the mining industry has been going in for nearly 800 years!

Known as the “Casemates”, this is the result of the mining leading to the creation of a series of inter-connecting tunnels that runs ~300km! There is no artificial lighting and is in total pitch darkness otherwise. It is very easy to get lost if not going with a guide. The temperatures in the caves remain at a 10°C constantly throughout the year and you’d need a sweater with you if you decide to enjoy the caves.

In the tunnels, there are many sculptures and paintings made on the sides of the walls. Some of the paintings are made of charcoal and due to the constant temperature and humidity conditions, never fade. 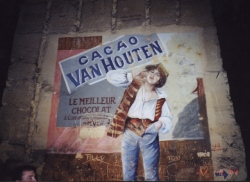 Some beautiful works of art can be found here. But we will never know the names of the artists – as these were never publicized. The paintings were only discovered slightly more than 100 years ago when small tour groups began exploring the caves. Here we found another form of art – an early advertisement board that the major advertising companies of today would be proud of!

These tunnels were already a tourist attraction for the last 100 years! Aside from its attraction, the caves had its other uses. The tunnels were used as a bomb shelter in the 2nd world war. Up to 20,000 people stayed at one time or another. It is possible to move between the Netherlands and Belgium using these tunnels as they run right under the present borders. A great way to skip border controls in the pre EU days if you can get around in the dark! 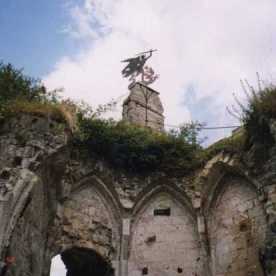 The caves are a great way to spend a morning or afternoon exploring Maastricht and its environs. Be careful not to stray away from the guide. It’s not a good thing to be lost here and become a permanent fixture!

Around the corner is the Fort St. Peter. Dating from early 1700s, most of its base and ramparts had been restored although the top citadel portion remains a mess of strewn rocks. It was a strategically built fortification overlooking Maastrict and served to deter invasions.

Such as it the legacies of history and divisions of politics.

Drive to the end of Limburg 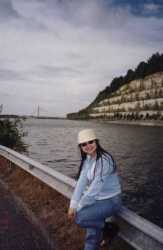 Limburg as a province is where Maastrict is part of, and there is a similar province in Belgium on the other side of the Maas river. Driving around these parts brought us past fields of wheat and over a nice suspension bridge between the two countries. There are many mansions or mini Chateau here too. It is close to France and the influence is obviously strong.

But we went further. The town of Vaals on the south-eastern end of the province (and the country) where the highest point of the Netherlands is located. It is also the place where the borders of Belgium, Germany and Holland meet – at a point called ‘drielandenpunt’.

For us it was not the maze that was important as the tower from which you can see the three countries from one point. Technically you would have visited all 3 by stepping up here.