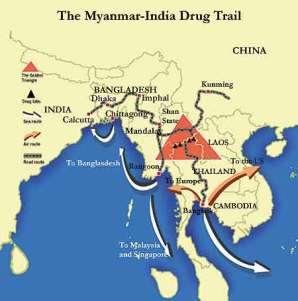 Fields of poppy. Harvesters cutting into the bulbs of the flowers collecting the sap. These are then processed in large boiling vats, eventually extracted into “cakes” of brown and black. Do you know what this is?

Well, growing opium to harvest for opium was something that was prevalent in the hills of the area that was eventually labeled the golden triangle. That was also a time of warlordism running trafficking the illicit drug trade. This is the infamous Golden Triangle.

Today, this name has been usurped by the tri-point meeting place of the three countries : Thailand, Laos and Myanmar. But has this place anything to do with the above drug activity? 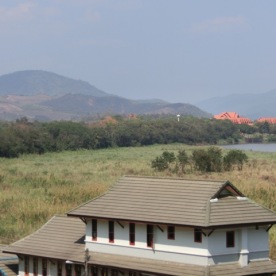 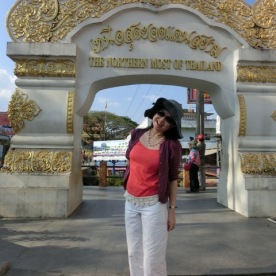 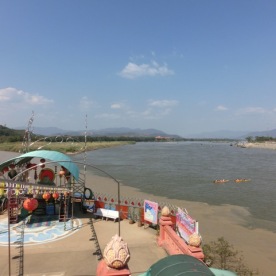 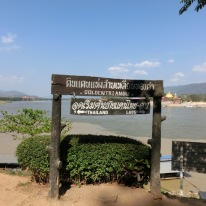 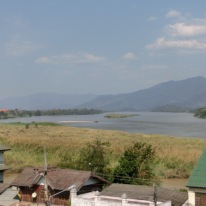 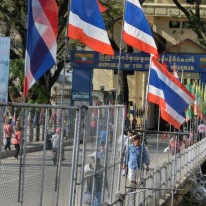 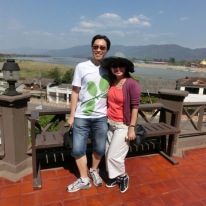 Absolutely not! Purely a tourist trap, many think they would be venturing close to a risky and dangerous place when in fact it is just a confluence of international borders – where the Mekong meets the Ruak river! Your guided tour package might bring you to Mae Sai, but that’s a bustling border town with a fortified crossing into Myanmar. Like the Golden Triangle, it is a giant tourist trap. Yeah, we can feel you too. What a letdown! We wanted to feel the risk too!

Fortunately, there are other things to do while you are here.

There are geysers in Thailand? 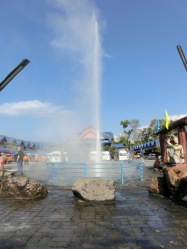 Yep. And it’s not small ones too. Probably not known to be a seismically active area, there is nonetheless a hotspring at Mae Kachan, which was our first stop after a 1.5 hour drive from Chiang Mai.

A geyser continuously shoot hot water into the air. While there are no baths around at the time of our visit (we think), there are pools where you can soak your feet in the hot spring water. Be careful though, the water near the start of the pool is exceedingly hot! Don’t soak too long or your feet could be cooked like an egg! 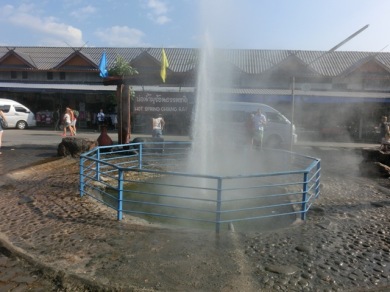 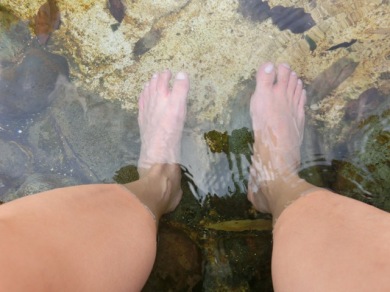 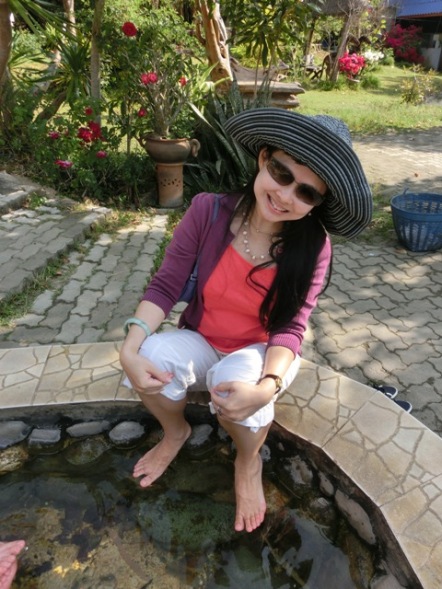 If you research hard enough, you will be able to plot the other hot springs that are in the vicinity of Chiang Rai, some of which have full bath facilities like the Onsens of Japan. But on our excursion today, we are on the way somewhere else,

Wat Rong Khun – aka the white temple that was built by a flamboyant playboy turned saint. Initially starting with only the main complex, it has now expanded tremendously with the support of donations from devotees from all over Thailand and overseas. Heaven on earth is the motto, but it starts with hellish scenes. 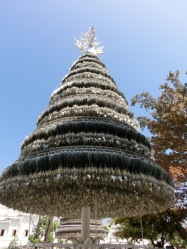 The builder wanted people to be able to visualize what being in heaven is about – so that they will be inspired to do good and aspire to enter heaven. Hence, everything is painted in white. 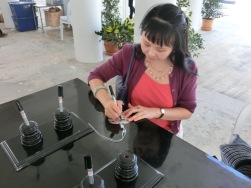 It is still in various stages of completion as continued donations has made it possible to build even more grandiose visions of heaven.

We paid Bht30 to place a wish on one of the many wishing trees that dot the temple ground. 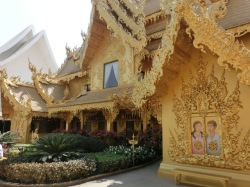 An interesting feature is – that the toilet building is painted in gold. Not sure if we’d need a toilet in heaven! With our wishes logged in, it was time to move on…

The real deal is to make our way to see the tribal people of northern Thailand – Akha, Yao, Lahu, Palong and Kayan. These communities are formed by the various tribal groups on invitation from the Thai government – to facilitate tourists viewing how these peoples live. A living museum if you call it, serves as a window for foreigners to see the world of the tribal people. We are not sure if these villages are run by local businessmen collecting the entry fees, and it’s hard to judge. Certainly we saw these folks come and go as they please, evident by the motorcycles that park all over the village. 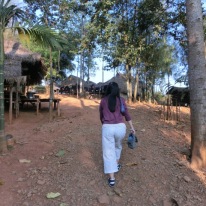 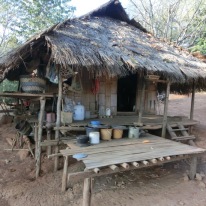 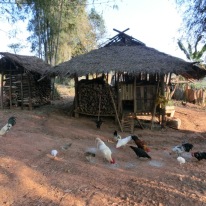 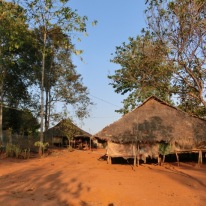 Historically these minority tribe comes from Myanmar and are considered refugees. Being housed in such communities is suppose to support their continued existence as a separate people – instead of assimilating them into “normal” Thai lives. We certainly hope this is true. Walking past tool sheds, chicken coops and attap huts that these folks live in, we are reminded of the old village days even in Singapore. 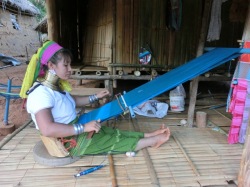 This is also where you get to see the “long neck” tribe that the Kayen are. Girls (and not boys) start to put on the neck rings from the age of five. 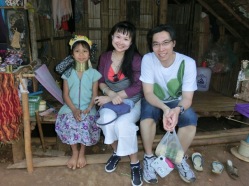 As they grow older, larger rings are placed around their neck. Contrary to popular belief, the neck does not grow longer, but rather the collar bone is pushed lower giving the illusion of a longer neck!

Why did they do this? Many studies cite reasons ranging from cultural beauty to protection from tiger bites. But as everywhere else, minority culture is constantly under assault as the young are drawn out to the bigger world outside of their village. 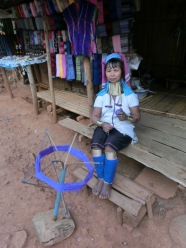 Today the village has a working area where stalls are setup for the villagers to sell locally woven fabrics and handicrafts. In this day and age it is probable that we’d never be able to see tribes people in a pristine original environment. We suspect that someday it may not even be able to see someone don a brass neck ring, even if one pays for it.

We purchased a book with proposed itineraries for exploring both Chiang Mai and Chiang Rai areas. Indeed with our new found mobility and interest in road trips, it seems highly likely that this essay will be modified in the coming years as well enlarge our handprint here in northern Thailand.

This journey was made in February 2014