In the old Hebrew pronunciation, where we are headed was called ‘yarden’. If one look it up in the web, one would believe the word means to flow, descend. And indeed there is a potential reason for this, since the river that provided a lot of the life-giving water flowed westwards.

That, is the Jordan river as we know today.

Actually it is ironic. For it is our Israeli guide that told us this story, or at least the history of the river. And it goes like this – the river that we see or will see today is but a pittance, a shadow of its former self. Gone are the days that there were a flushing flow of water in which Jesus would have been baptized. Today the river is but a stream in many place, particularly along the border between Jordan and Israel. Climate change certainly has not helped here.

But then today we are not focusing on the river, for that shall be the case when we cross over into the land of biblical sites. We are getting into the Hashemite Kingdom of Jordan, rising out of the colonial afterbirth of the late 1940s. 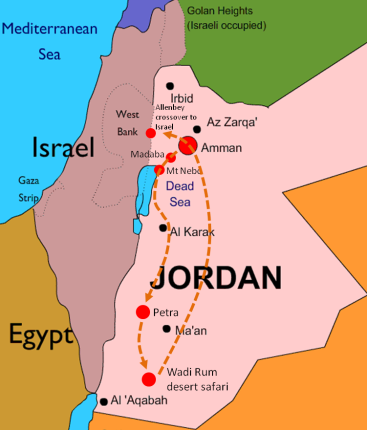 You might know we were on a 14D/12N tour conducted by local travel agency Dynasty. And it was not cheap. Coming in close to S$5300pp, it would include all flights, transfers and meals. Being ‘escorted’ has its privileges as we were to find out. Makes life really easy at border crossings or customs points… So we flew close to 3 hours from Dubai into Amman, the capital of the country after having endured a red-eye flight from Singapore.

Amman city is not as chaotic as we envisioned it to be. Perhaps we were there over the weekend which starts from Friday. Unfortunately we missed out on the Roman theatre as there were protests against Trump’s recognition of Jerusalem as Israel’s capital.

Ancient lands with lots of history

Most of the main sites associated with the Christian religion lay in the land that is the state of Israel today. But there remains in Jordan some of the best preserved cities from the time that Jesus walked the earth. Such as the Citadel in Amman. Its museum houses some of the best collection of artifacts from Paleo times till the age of conquering empires. Truly something not to be missed.

And if there was one observation we had, it was that there were quite some independent travelers who had come. Some of them had drive rentals. Adventuresome indeed! And we might have done so too if it weren’t for you meddling kids the chaperoned crossing over to Israel. And spent more time at each location too!

We started out at 7:30 from the hotel and spent the first 1½ hours following the guide from the Siq right to the Treasury. We had a coffee stop just before the Nabatean theater, and then we were on our own. Good to note that opening times are 7am in the morning and 7pm in the evening. But after 5pm apparently nobody is allowed entry anymore. We saw many mounted tourist policemen riding around. Felt safe.

Here a map of our walk (follow the arrows) and the “star” sites we touched:

We were suppose to meet back at the hotel at 2pm for lunch. But in the course of walking back down from the Monastery, Mel’s shoes gave way. Actually it “died” along the colonnaded way… would have buried it there too if not having to make our way to the Royal tombs. Horse carriage costs US$40 (JD30) single or return. The mule or donkey ride from the base of Al-Deir to the summit would have cost US$15 per animal (one way we think). We saved on both and on hindsight should not have been that economizing. Because the entire day of walking cost us more than 18,000 steps or 14km. But guess that helped to work off the calories we were taking in with the rich meals.

And as one might observe of the map, we barely scratched the surface with the stars indicating where we touched so to speak. Thus the reason some say it would take a minimum of 4-5 days to cover them all. Perhaps at a leisurely pace because racing from one side of the site to another was definitely not physically an easy task in the heat of the day. And this was in winter no less! If there was one thing we would have energy to do, it would be to climb up the mountainside from the theater to the summit – and have that view over the Treasury. That would be the true million dollar view.

With all that walking Mel fell a little under the weather that night. However with good nursing from Suan he bounced back the next day!

Overall we did all of the sights as listed in Dynasty’s itinerary. The only one we “skipped” was the Roman theatre and Nymphaeum in Amman due to protests. And on consensus amongst the 15 of us in the group we decided on the return to Amman to leave it out. It was a pity we did not get out more to see the city, or even a little up north to visit the Roman city of Jerash which could have added a day to the itinerary.

For the entire trip, we only spent 4 full days in this country. But it was well spent! Journalog with all the details can be read here.