magine seeing a different view each day from your window – especially when you awake. Imagine the beautiful vistas that you have on your walls back at home skirting past your window…

That’s the Alaskan cruise feeling every morning that we awoke to. An 8-day sailing trip from Vancouver or Seattle usually takes you all the way to the northernmost state of the US – Alaska.

Along the way, you will stop at a few ports, some of which cannot be reached except via the sea or the air! All the while you will be entertained and dined onboard a ship with many optional activities throughout the whole trip. That was not a dream, and we took the plunge in June of 2009.

Alaska, as you should be aware is the 49th state of the US. Originally purchased from the Russians in 1867 for $7.2m, it became a state in 1959 and has one of the lowest populations in the country at ~700,000 inhabitants at the time of our journey.

We started with a long flight to Canada (here) and the arduous check-in procedure before beginning our sampling of adventures during the stops at the port of calls. It was a harrowing wait to get onboard. As the vessel was leaving for US waters, we had to clear US customs – which is so complex for non-US citizens. So, one might consider to take the cruise from Seattle as an alternative.

Our voyage is a sail northwards. If one is fortunate, opportunity to view whales exist, as they make the inside passage their migratory living habitat during the warm summer.

As we sailed out of Vancouver bay, we passed by Vancouver island with its undulating range of hills.

While the sun began to hide behind the horizon, a beautiful array of lights fired up the evening sky. At this latitude, it only gets dark after 10pm. A walk on the deck after dinner is highly recommended to enjoy these great views though the winds make it feel cold. So jackets are a must as the temperature was still well below 18°C in the evenings. The seas are calm as we made the sailing journey. This is the best part; we finally had our first peaceful night’s sleep after the 24-hour journey from Singapore to Vancouver.

Overnight, we had sailed past most of the British Columbian (BC) coast and are coming up to the US waters of Alaska. In the distant one will see the great hinterland of BC with the rocky mountain range behind it. This territory remains largely forested and teems with wild life, sustaining a viable population it is said. On a late afternoon, we saw some whales surfacing in the distant along the shores. How exciting! Too far for cameras to capture, it was an awesome sight.Did you know that calling any of the native Americans ‘eskimo’ is considered derogatory? Not sure why though. Learn something everyday… 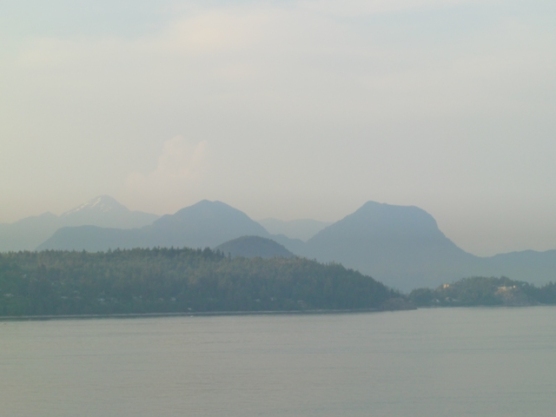 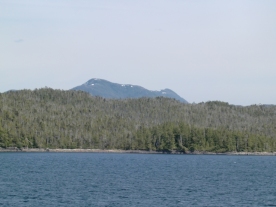 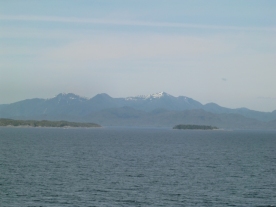 This mix of sun, sea, snowcapped mountains in the distant provide wonderful backdrops for photo enthusiasts. The calm belies the ‘tempest’ that is about to come. Our 538 nautical mile first leg is about to end as we arrive to

Catch Ketchikan if you can

Honestly, we did not imagine it to be like this.

Our first port of call and all we could see when we disembarked was lots of shopping and “free” gifts in the various brochures that get pushed into your hands. Buffeted by the sea in front and the mountains on its back, the only way in and out is by air or sea. What started as a port for fishing also boomed due to the Gold rush.

One indicator of how the fishing is good in these parts is the convergence of a large number of Bald eagles hunting along the rivers and creeks. The national symbol of the US, one of them was fishing by the creek. It had perched on a balcony as it rested to wait for fishes swimming up the creek. You can imagine the crowd it attracted. Excited photographers clicked away before the bird got annoyed with all the attention and flew away.

Now we only had the day here and it is recommended to take the funicular (US$2pp at that time) to get up the hill and visit Totem pole park.

Ketchikan is also known as the ”totem pole capital of Alaska” as there are said to be more totem poles per capita here than the rest of North America. Someone correct us? The Totem Pole heritage center has a collection of really old totem poles from hundreds of years ago. One might notice the “dinosaur” looking pole and that one is suppose to be a representation of the beaver…heheh…we don’t have an eye for art obviously. Can you spot it? This was a really short stop. 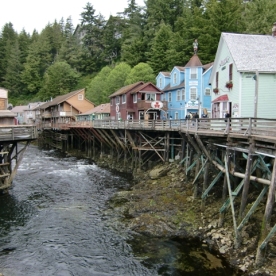 And setting sail yet again, it was time to visit

More than just capital, Juneau that is

One highlight of cruising to Alaska is the opportunity to stop and come up close to a glacier and view its majesty.

At Juneau we got up to Mendenhall, which can be visited at all times of the year. At 12 miles long, the Mendenhall is one of Alaska’s most visited glacier. Located well within driving distance from Juneau, it is accessible all year round – just 15 minutes’ drive from town. Because of the glacier does produce melt water, there is a lake in front of the glacier.

According to the National Geographic, there is estimated to be more than 100,000 glaciers all over Alaska. Many of the glaciers are tucked away in the mountain ranges that ring the state. While many are small, nameless and inaccessible except by air, there are some really large ones that exceed 2,500mi² in size or roughly 4 times the size of Singapore. Some of the most stunning glaciers calve into the sea – not this one though at Mendenhall.

The lowest end of the glacier (the ‘face’, remember NZ south island here?) is constantly breaking off, which sends large chunks of ice into the water floating out of the bay into the open sea. The large chunks of ice floating in the water gives off a beautiful blue glow in the sun. This color that we see is the reflected light that is coming out of the ice crystals. As most other components of light in the spectrum are absorbed, only blue light is reflected out producing an icy bluish hue.

The glaciers are constantly moving down slope, slipping on bedrock. While there are numerous fly packages offering landings on glaciers, it is important to take special care when walking on one.

Our own experience on Fox glacier in New Zealand taught us that there are many crevices, which slip tens if not hundreds of feet deep. At the local observatory building, you can see a vast literature of models and information about the formation of glaciers. Suan even had the opportunity to get up close to a stuffed brown bear!

That was as close as we got to a real one… As we left Mendenhall we are reminded how it has receded in the last century – demonstrated by the fact that the observatory tower used to be part of the glacier!

Before leaving Juneau, our tour stopped at a local Salmon hatchery. This owners of the hatchery built a “replica” stream, hatching the salmon fry and conditioning them to “remember” the location where they will swim back when matured. This is a vastly different approach than large scale farming of the fish in what some would consider overcrowded pens.

Next stop which most cruise ships dock at is the a gold rush era town of Skagway.

Not that much to see on its own, we were taking the Yukon White Pass railway ride all the way up to Canadian border. After gold was discovered in 1896 in Yukon’s Klondike gold fields, a large number of prospectors (nicknamed “stampeders”) made their way there. The White Pass was the main route to reach the gold riches and was built much later. 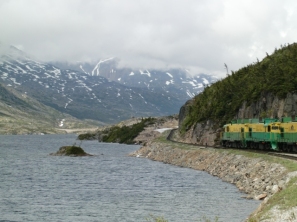 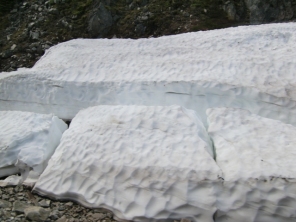 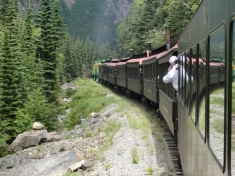 It turned out that most of the gold fields had been staked out leading to quite some disappointed folks. Eventually the gold was exhausted, well at least the ‘easy’ ones. Thus the railway became a scenic route for tourists from afar (such as us). This rail journey offers some majestic views and is well worth joining.

As the rail journey progressed, we came across many old bridges that were used in the early 20th century. Some (ok all) are now in a state of disrepair. Look at them! We got a really close picture of one of the derelict railroad bridges. Look at all the rusting steel beams supporting the rickety rail track! Certainly won’t want to cross these bridges!

At the highest point, we can see snow and ice still melting in the summer sun. And when we got to the Canadian border, the train reversed and started its way back down to Skagway. Beyond that point lies the great Yukon territory of Canada, 600 miles of frozen terrain will greet anyone brave enough to traverse it on foot. 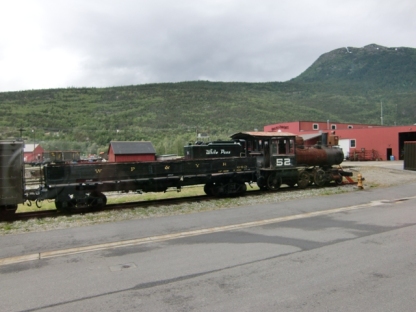 10 thoughts on “The inside Passage Part I”