If you recall in our cover story on the canyons of the southwest (here), we had rounded the loop from the south side of the Grand Canyon over the “top” and back to Bryce via Moab. It was the tail end of our road trip. Ok, it was the last day! 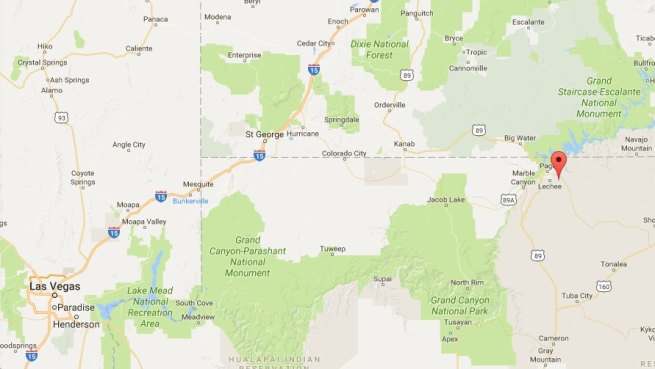 Being in Bryce, we are about 120 miles from the town of Page. We were looking for the famed Antelope canyon. You know, the one with slots and crevices? Well, we sped that 120 miles reaching Page at about 1030hr in the morning. Now the canyon is a little over 10 miles further away and you have to get on a guided tour from there. You cannot drive into the canyon on your own as it is Native American land. All visitors park at any one of the designated areas and they are controlled by the Navajo nation.

The Navajo name for Upper Antelope Canyon is Tse’bighanilini, which means “the place where water runs through rocks”. Every year around September, flash floods roar through the canyon.

Many times in the past, there were hikers who were there when the flood waters came rushing in, sweeping them away. The sands on the ground shift as well due to the currents of the strong flood waters moving them each season. We were told there is always a storm watch in the event it results in a flash flood. At the time of our visit the last tragic flood occurred on October 30, 2006 lasting 36 hours, and caused the Tribal Park Authorities to close Lower Antelope Canyon for five months. So the danger is real.

Anyway, when you walk in the slot canyon you’ll understand.

Small groups of about 8-10 are led in at a time using 4-wheel drives that traverse the sands towards the canyons. The upper canyon seems to be larger based on photos and can be accessed directly by walking into it. We did not have a good time taking photos in the canyon itself, as the lighting and play on light streams coming from above the canyon caused a lot of scatter. The digital photos thus look unfocused. Film photography was not any better unless you have a tripod with you. Darn now we know why the other visitors brought them professional looking cameras!

But at least the feast was for the eyes. For the constant flooding of the canyons and the swirl of the waters may have been the main cause of the markings on the walls of the canyons. One can observe how they are not sedimentary like that in the other canyons though there appears to be layers…

Fortunately, that was not all that we sped all the way here for. This canyon, along the with the town of Page is situated at the bottom of the 1.2 million acres (5,076 km²) Glen Canyon National Recreation Area (NRA). The lake stretches for hundreds of miles from southern Utah to Northern Arizona and was created in 1966 with the Glen Canyon dam. 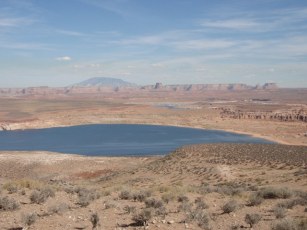 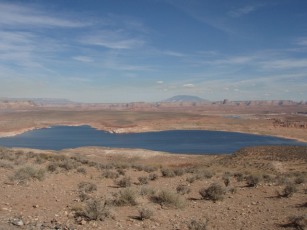 Our stop was unfortunately brief, as this was neither unanticipated nor planned. On hindsight, we’ve discovered there are so many hiking trails to explore Glen canyons, which is every bit as spectacular as the one they call “grand”.

Our quick jab at getting here took place in October 2008