There is an almost religious belief that things work like the clock in Switzerland. While it might not be timely always, it is true to most extent that buses, trains and planes do run on a “fixed” timing. So that’s a reputation that has come to be an expectation. And this country can be said to exist on the roof of Europe. Located mostly in the Alps, the nation is landlocked and enjoys a reputation as a safe haven.

Neutral since the Middle Ages, the country escaped both world wars to emerge as a “tiger” economy with leadership in banking, watch making, chemicals & pharmaceuticals. It pays to know the mountainous country is home to the world’s largest food company and some of its largest private banks!

During our initiating journey with a motley bunch that was like a UN delegation, we passed through numerous mountain passes, as natural as water flows downhill. One such pass is the Fluela pass – linking the southeast to the rest of the country. At the top, it is ~2400m high. Not quite the Himalayas, but still snow bound in May when we were here.

If you love mountain scenery, you’ll be spoilt for choice in Switzerland. While we were whisked to Mt Pilatus, there are numerous others to choose from, amongst them Mt Titlis being the other most visited. Our adventure up Mt Pilatus started with a cogwheel driven funicular ride. When we got atop, the views were spectacular! Flatlands to the north buffet Lucerne lake, a natural barrier that is formidable – explaining why the Germans hesitated to attack the Swiss in the World Wars.

An interesting story was told to us about the meeting of a German and Swiss general during World War II.

The German General remarked that he had twice the number of soldiers as the Swiss, to which the Swiss General replied: “then I will ask my men to shoot twice”. The Germans did not invade the country… Whether real or not, the truth is that the country has been a bastion of neutrality and haven during the past centuries of upheavals that gripped much of the European continent. Probably the Germans appreciated that too.

No visit to Switzerland would be complete without a visit to the Matterhorn. Made famous by the Toblerone chocolate company, the mountain is has a sister peak aptly named the “Klein” (small) Matterhorn.

At the top of this lower peak, there is a cave in which sculptors from all over Switzerland exhibit their ice carvings. In May, the weather is still quite unpredictably cold! But when the clouds do clear up, it’s a ‘wunderbaar’ view of the Matterhorn.

The way up is not easy, as we took 3 cable cars to get to the highest station at 4778m.

At that level, it is perpetual ice and snow, plus with the winds whipping a frenzy – was really chilling! This was not the factor that got us running back down the mountain. It was the tour guide telling us the coach was leaving that made us bolt. You would too! 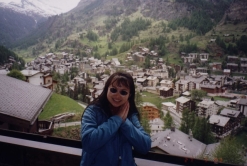 We stayed in the charming but cluttered village of Zermatt (1,616m), with a breakfast view of the Matterhorn. As much as 25% of the country is mountain (which would be about 10,000km²). It has some of the best skiing areas and probably the most expensive ones too. 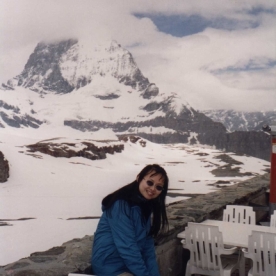 Even in the southern part of the country, it remains hilly and occasionally mountainous, which lends to the fortress-like nature of the country.

We had came up to the swanky resort of St Moritz, where the rich come to ski every season. It’s also not far from Davos, where the top financial leaders of the world gather to talk.

We took the scenic rail through St. Bernadino pass that brought us to the Italian lakes, where the more affluent Swiss do their “cheap” shopping. Read more about it in our Italian country log. 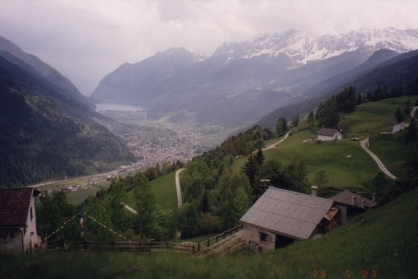 In this parts, it is sometimes hard to tell when you are in Switzerland or Italy. Lake Locarno is shared between the two countries and people here simply cross over in each direction daily – the Swiss over to pick up shopping while the Italians come over for the jobs.

Now lake Geneva is actually called “Leman” in French. So, imagine the confusion it wrecked on the anglophile crew of travelers that our group was. We thought there are another place that we should be visiting!

However the stop at Chillon castle was scenic, though brief. Such is the price to pay for being in a group. You have a schedule to keep, and that was to get to Geneva, the most Gallicized part of the country and home to quite a few UN institutions. In fact when we were there the shops were beginning to board up their windows. Mel actually walked all the way from Chillon to Montreux (story here)

A protest march against globalization was planned the following day against a G8 meeting held in neighboring Evian. A luxury watch shop manager told us that if they do not take any precautions, insurance will not cover their damages.

It was an interesting incident in which the store associate asked us for our UN credentials in order to process a discount. We should have told them we forgot to bring our pass and take the discount!

Come to think of it, we did not even have a photo of Geneva aside from viewing the Jet d’eau up close. Wow, it was that fleeting…

Fortunately, it was not the case with the other cities.

We did spend some time Zurich City (Mel’s got a favourite hotel), beneath which is said to be enough vaults to hold vast quantities of precious metals, money and treasures of all kinds (art for example). After all, this is a country where the rich can keep their money safe and confidential. 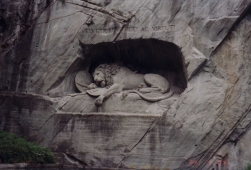 In Lucerne, the Lion monument stands to commemorate the Swiss Guards who were killed as they tried to defend France’s Louis XVI from the guillotine against the hordes of the French revolution in 1789.

This is a city ringed by 3 mountains (Jungfrau, Monch and Eiger), and it is the site of the famous chapel bridge that runs across the lake. Destroyed in a fire in 1993 when a boat caught fire near it, it is now mostly restored to its former glory. Our guide told us boats are not allowed here now. That wasn’t the only thing to do, the defense walls of the city is nice walk, up from which you can view not only the town but the lake too.

Aside from the cities, numerous villages and smaller towns dot the landscape as we traveled across the country. Unfortunately as a tour group we did not stop at many – except the odd few such as Interlaken, which literally means between lakes. 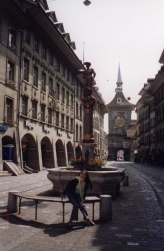 While some may mistake Geneva or Zurich to be the capital of Switzerland, it is Bern that actually is. Located in almost the middle of the country (perhaps a little north), it is a pleasant city that is home to the federal government. Remember that the country is divided into cantons. Each one can make their own laws, including taxation! 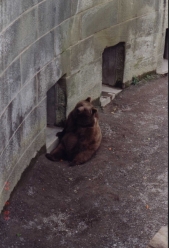 Main attraction is NOT the bear pit, though it would be something to check off – to see the poor bears shaking their heads as if in a sanitarium. The old town center is a beautiful stroll, plus the Glockenspiel plays every hour.

Being on a travel group is indeed limiting. In a series of smaller stories, we will share with you in some detail some of the places which Mel ventured to as part of his business trips. Yeah, lucky chap who seem to have an affinity with working with Swiss folks.

Read here about Solothurn, the most baroque city in Switzerland, or so we are told. The mountains that ring the town of Neuchatel sitting on a lake of the same name is also a nice story to be shared. And finally, how can Mel not tell you about the storied lives of the famous in towns like Vevey and Montreux. Charlie Chaplin and Fred Mercury come to mind…