Mel’s a history buff. And the journey to Penang was not just for the food which one must savor, but also the heritage behind the mélange that is today the island. At ~1100km², Penang is almost 1.5 times the size of its southern cousin – our little red dot. Ok so that includes Province Wellesley on the mainland.

Both were part of a trio of settlements governed directly as colonies of the British empire for an exceeding long period of time. Yeah. Students of history will tell that for the rest of the peninsula, the British ‘governed’ through the use of “residents” that reside in the courts of the local sultan. They were merely ‘advisers’, but gradually took over administering and planning of these states.

Just to remind back in the time (19th century and early 1900s), the peninsula comprised of states large and small ruled by individual sultans. That could be a couple of volumes of books to delve into…

Back to settlements of Penang, Malacca and Singapore. Their development trajectory could not be more stark. For today Penang is still part of the Federation of Malaysia while the little red dot had left for more than 50 years!

So what makes Penang and specifically Georgetown so special to warrant it world heritage status? Food played a part and you can read all about our adventures here, but this story focuses on the ‘serious’ stuff.

You might have read the criterions that the UNESCO folks use to guide their award of a site. To them the multicultural nature of the town was considered paramount. And along came with that the influences of these cultures communities, enclaves and precincts.

Now in order to appreciate these, we reckoned that we needed to explore them on foot. Sure there is the option to take the trishaw for be chauffeured to each location that the driver knows, but one might miss the forest because of a few trees. So yes, our preference is to walk. And there are designated walking routes that one can find in the web for your own preferences.

A free ‘CAT’ public bus route runs around at intervals of 15-20 minutes. These are special buses that serve a select bus stops with easier access to tourist sites. So look out for them to cut down on your walking to jetty, fort Cornwallis etc. Alternatively one can take the hop on/off for a fee. We chose the former. Yup. Cheap.

And to help you identify such heritage “zones”, there are wrought iron markers that try to convey the history and unique aspects of the sites. Fashioned in cartoon style, it mixes local humor into the description. In our photos, you probably might not make out the words or sometimes the scene the markers are presenting. Tip: choose a time in the day where the sun is low so that the shadow of art marker does not cast too much of a shadow. Hint: it is not early in the day… which could be blazing hot. 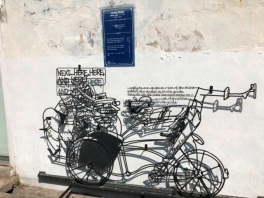 Usually these markers are located on the walls of shop houses. Have fun seeing and reading all about them! We sure did.

And speaking of shop houses.

The UNESCO also considered Georgetown to have an exceptional range of these, considering them unique of architecture and landscape from the multi-cultural influences that were and still are present. You might know that along with the Chinese, Malay and Indians the British administrators introduced European elements in the buildings one sees – such as the churches and colonial government buildings.

To be honest one needs not go to Penang to see shop houses. For there are many all over southeast Asia. One only need to refer to our MRT series to see them in the little red dot too… The point is, in Georgetown they are pretty much concentrated and largely remains untouched for redevelopment into new buildings. That in our opinion is the distinguishing factor. 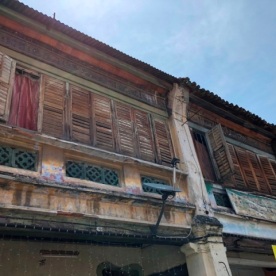 Today these still house businesses as they did more than half a century ago.

Some have been converted into boutique hotels with the exterior unchanged. Perhaps a few coats of paint… Did you know that an entire book was dedicated and published about the shop houses of Penang. In our view not only are there lots of shop houses, but they span almost the entire history of its development – from the early 1800s till the post war ‘modernistic’ design.

Sure one needs to be a true architecture buff to seek them all out. But you can too play that role when you are walking along the routes like we did.

As we walked and ate our way across the town, we cannot but help notice that some of the walls of the shop houses are adorned with paintings. Seems like street art is all the rage not only in cities in the west but have also caught on here too.

In 2012, Lithuanian artist Ernest Zacharevic painted a series of wall murals across the town depicting local life during that year’s Georgetown festival. Not all of these below were painted by him, as we aimlessly soak in these murals as we came across them. 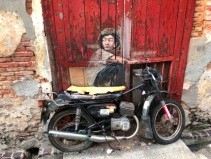 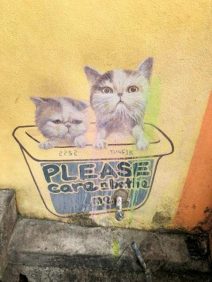 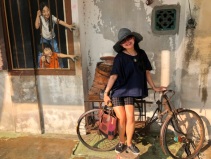 Today it is almost a game of amazing race to capture photographic material of these paintings as evidence of having been to Penang. We see tourists (ahem like us) taking trishaws to specifically find and pose in front of them. This might be a wonderful idea as a team building event don’t you think?

This spawned a series of ‘copy cats’ that has led to a ballooning of wall art across the old town and beyond. Such as this one of Suan sitting on a bicycle with Mr Bean.

And Ernest would definitely not have painted this Chinese deity! Would he?

This was merely an extended long weekend for us. And we only touched the northeastern tip of the island that is Georgetown. Sort of like having only been to Marina Bay in the little red dot. But our days were filled with fascination of viewing pleasure of the sights, sounds and smells of a heritage town that had not been rapidly redeveloped like its peers.

Does this make you interested to make the same journey as us?

This piece penned from our April 2018 journey

On day one we had to walk since the hotel check in was 3pm… so we dried out in the sun but enjoyed it.