This story is about how we spent the 7 hours that we were given when our cruise ship (read here about itinerary) docked at Belize city. It was the late winter of 2005. But where we are headed there is no such thing as a winter season.

Now the country was once a part of the British empire, the few mainland possessions outside of Canada on the Central and South American continent. Prior to the settlement of the region by the British, it was part of the Mayan empire for the longest time. And it was for this reason that we have made the decision to embark on a little excursion away from the luxury of our cruise liner.

If you read the country’s website, you might be convinced that the country is inheritor of the greatest number of Mayan sites. But of course that is not exactly true because of its relative small size. Who doesn’t have the ‘best’ of the best? And how about the suggestion it might have at its height, there being 2 million Mayans living in the 21,000km²+ that forms this country today? All speculations no doubt but that’s not the debate in this essay.

Truth is, there are quite a number of Mayan sites. If you had just 7 hours after disembarking from the ship, what would you do? We determined to make it the most famous Mayan site on the list of excursions!

Maiden of the rock

Xunantunich might also be known as “stone woman” because locals said a ghost in white lived there haunting, this site is located across a village and right at the border with Guatemala.

It was a 2-hour drive across the width of the country (approximately 80miles). But first, we had to navigate out of Belize city. The guide told us (hopefully jokingly) that there were only 4 traffic lights in the country and the one that were stuck at was the only one working…LOL. We hope that has all changed now.

Maybe he was trying to lighten up the mood of the folks on the coach who were all somberly looking forward to seeing the archaeological site. Or perhaps they had a drink too many last night!

We fell asleep as soon as the drive began, as if enchanted into a sleep by Mayan magic and were only awoken when we arrived at the village (which we now know as San Ignacio). We had to cross a river on this wooden raft of a barge (sigh did not take picture) and get onto mini-buses at the other side. These buses took us all the way to a plateau, where the ancient buildings were first discovered.

We walked around what must had been the plazas of the complex, orientating to the sections where the nobility must had lived. You must remember that in all dynastic arrangements, the nobles usually want to be close to the royal seat of power. Same everywhere else we suppose.

That orientation was done at noon time – in the 38ºC heat. Tip: umbrellas would be useful here.

While it was not spectacular like the ‘pyramids’ at Chichen Itza, it was still quite a large complex. Just that the forests have reclaimed much of it. 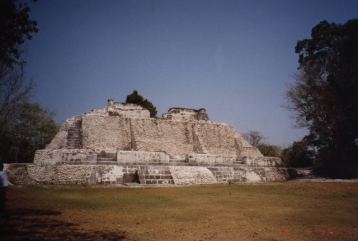 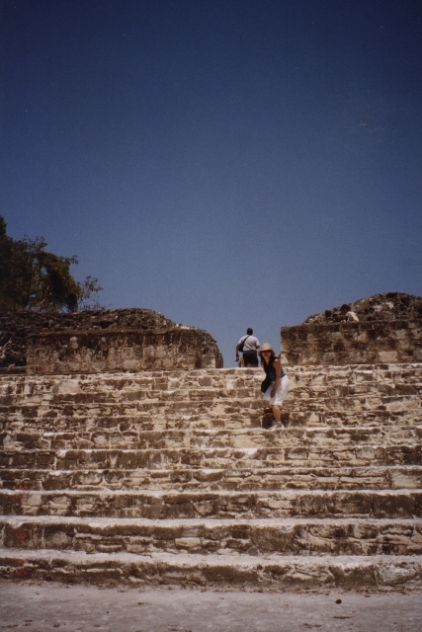 The core sections of the site is not very large, probably around 1km². And while the site had been excavated, there are still ongoing work to uncover yet more at the time of our visit. Xunantunich was said to be a major ceremonial center during the late Classical period, a time of declining and fragmenting Mayan power.

The site is composed of six major plazas, surrounded by more than twenty-five temples and palaces. The most prominent structure located at the south end of the site is the pyramid “El Castillo” (The Castle) which rises 133 feet high above the plaza. “El Castillo” was the tallest man-made structure in all of Belize, until the discovery of “Canaa” at Caracol.

Our group was brought to this highest structure in the entire site. The front side was facing a square that would have held the masses of people while the back part was probably used by the priests and Kings to prepare for their presentation. The facade in the background is a replica with the real set of motifs behind the replica – to protect it from the elements. Getting up was relatively exhausting but take note it was a really steep descent. Someone in our group was so exhausted that she had to rest at the restaurant sitting out the rest of the walk. Tip: put on good walking shoes for this activity and be prepared to huff and puff a little. 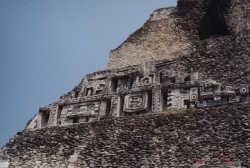 The most notable feature on “El Castillo” is the reconstructed frieze on the east side of the lower temple which is said to be used for astronomic purposes. Xunantunich was postulated to be a center of power during the period between 600AD till 890AD. The city rose when its neighbors declined, typical of the Mesoamerican cycle of politics. However there was a substantial period when it was said to have been abandoned due to an unspecified event. Perhaps famine due to drought or warfare, but the city revived later on.

One you get on the top you can see into the neighboring country of Guatemala.

As we said, at the time of our visit the site was not fully excavated yet and additional explorations and excavations were being performed by Dr. Richard Leventhal and the Department of Archaeology, in an effort to better understand the history of Xunantunich.

Honestly with 2 hours either way to/from the site, there was only 3 hours to appreciate all the splendor that was on display. It was (is) definitely a popular site, evident from the constant flow of tourists such as ourselves arriving on the mini buses.

Well, we had a ship to catch. Time to get back to our boat, dinner and shows!

To be honest, Belize is famed for a good number of other sites such as the great Blue Hole and many barrier reef islands to snorkel in. And if we had an opportunity to be back again we would! For this time it was only an excursion and the choices confronting us were hard.

Definitely not the only article on this country. Look out for more in the future!

This journey was made in March 2005

7 thoughts on “Belize – a Mayan expedition”