Coming across the strait back to the mainland from Patras, we had just completed our Olympian feat (here) of making it diagonally through the Peloponnese peninsula. We were on the way to the north of the country, one close to the modern state of Macedonia, with which Greece has quite a dispute over the use of the name. It is good to know that the modern state to the north of Greece is a Slavic republic, distinct from Grecian language, culture and traditions.

So all references to Macedon in this essay is made to Greek elements.

Where we are going would be seen in ancient eyes to be the periphery of Greek civilization. You might remember we said that only freeborn Greeks can participate in the Olympic games. Well, the Macedon King Alexander I could only join in after proving his Greek ancestry! That says a little about the relations between the ancient Greeks and Macedonians who are claimed to be cousin peoples.

Many of Greece’s monuments lie under the ground undisturbed. For those that are exposed, they are in an unfortunate state of disrepair from centuries of abuse or wanton destruction. You’ve seen the ruins such as the Olympia and Sanctuary of Athena in our previous handprint stories. And it would not be any different for this principal place for Greeks to have

Your fortune told to you? 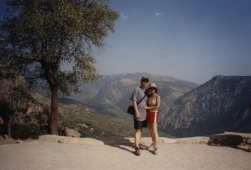 The way to Delphi is up the sacred mountain Parnassus. This great mountain overlooks one of the largest Olive growing areas in the world, so our guide will say. It is a fact, that Greece is a major producer of olives and its oil. At the time we visited, Greece had approximately 120 million Olive trees if our guide was accurate. Hence it is no surprise that Greek Cuisine is generously garnished with the use of it. Great salad, grilled vegetables and a lot of meat, you will be spoilt for choice…

Once you reach the oracle, you will need to walk up the slopes in order to reach it. Yes it’s hard work to get your fortune told, but you can also pose in front of the columns for photos along the way up as a consolation. Here on the slopes of the mountain, the oracle dedicated to Apollo was built.

As you can imagine, Delphi is perched on the mountain and in the old days was really a steep climb for many a pilgrim who’ve walked. Well they’ve probably traveled the same distance, except we came by way of a metal horse carriage – a coach bus. The oracle was supposed to have given advise to its visitors on what the future holds. It’s a kind of a seer…a fortune teller, but we did not ask for anything. Ok, so we did. Won’t tell you what we sought! 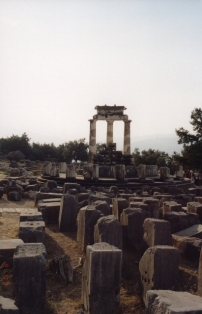 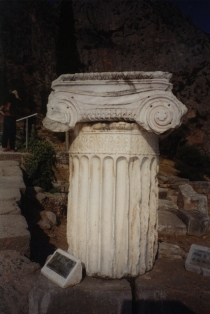 Not unexpected, most of the monuments are broken down. Our guide told us many of the columns are simply put together, sometimes by intuition. An example is that of a Corinthian column that was found, but could not be matched to any other structure. So it was left on its own. Lonely. Perhaps they will find something that remotely fits some day. Like most sites, much of its original material was probably pilfered away for rebuilding.

The walkway: ‘sacred way’, was a road where a row of embellishments adorned both sides. The sacred way was a place where rival cities exhibited their contributions to the oracle. These influential people are clearly posting “propaganda” to demonstrate their wealth and power to their rivals. It was also a way to gain favor with the gods with the piety that would be “bought” from all of these dedications? To us this is the business of religion, for very few of which in the world so far has managed to elude getting into material riches.

Take a break as you ascend and look back, for at the oracle one can see the temple of Athena lower down the hill. Not only that, on a clear day as we had – we could see all the way to the valley between the crests of the mountain range. Hmm… can we see Athens from here? No. 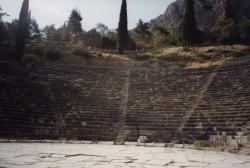 you’ll have all the other tourists here as audience. Who knows? One of them might be a senior music executive! Yeah, sure.

Once out of the sanctuary, we took to the museum. So many artefacts are here, such as a mighty urn recovered from the site. Wondered if it contained offerings of olive oil. Of the many housed there, there is this “golden” bull all in pieces stringed up to illustrate how it would have looked like before it disintegrated into a heap of what could be mistaken as scrap. 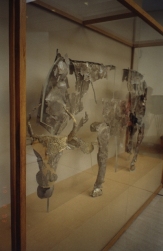 Here we also saw the bronze statue of a man with what appeared to be harness straps. Can you imagine the zigsaw puzzles that the archaeologists had to work with? There are so many other artifacts from the sites of Apollo and Athena’s oracles that one would be spoilt to take time to view them.

If you ask us, this would be the best place to appreciate what was here before, since it is unfortunate that out there in the actual grounds the pieces would have strewn in an undecipherable pile.

But then it was time to leave for it was getting dark and we had to head further north, to a place that is,

Further north as the crow flies, a beautiful locale awaits you, as we encounter the boulder hills of Kalambaka. Nestled amongst these boulder hills are monasteries and nunneries dating back to the early 1500s. 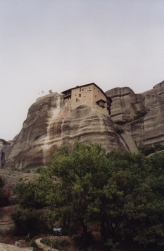 Built during the time of Ottoman occupation as sanctuaries for hermit monks, some are still inhabited by a small number practicing their own aesthetic version of the Christian religion.

As we approached in the midday, we could see the curious structures. Having a lunch in the town, we followed up with the visit to the monasteries. As we said, the monasteries are built on the top of cliffs of rock. 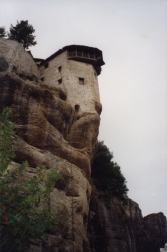 These cliffs plunge straight down to the valley and are only accessible by rope-way hoisted from the monastery itself, forming a formidable barrier to modern tourism. That was in the past. But some are now connected by road that leads to the top of these boulder hills… no escape it seems.

So the invasion of tourism had also reached here.

The view from the top of the monasteries is beautiful. As we said there are still monks and nuns residing in these monasteries, so these are active places of worship and devotion. Not museums. To get into the monasteries one have to be covered… no short shorts, but if you did not bring along your own, you can borrow a dress or shawl to cover the shoulders and legs. When you are here, seek out that one vantage point from which you will be able to see all four of the monasteries. That’s the challenge!

It is well worth to visit despite the distance (~350km from Athens). You can take a day tour from Athens and that takes the whole day. It was a four-hour drive though one way, so if coming here independently it pays to stay the night. In fact from here one would easily get across to Macedonia province too (in Greece).

Perhaps seek out the origins of Alexander the Great. That will probably be something to do if we get to return to Greece, perhaps along with touring more of the islands.

Be prepared for a long drive. And remember bringing along an umbrella when visiting Greece in the months from June – September. Temperatures are well above 35°C and there is hardly any shade in most sights. And do drink lots of water too.

We explored the heartland of Greece in August of 2003

And will next be getting onto a cruise ship to see the islands here!