As you would have read in our story of Madrid (here), we were in Spain for our honeymoon. 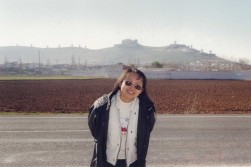 After a relatively low key millennia evening, we had toured the city with the rest of the group. However clearly the excitement for us at this point is not the city. For we had done that already.

It was time to road trip out of Madrid.

And the first stop was the city of Toledo. Already an important center during Roman times, this city is the religious capital of Spain. It can be considered to be the most sacrileges site in Spain. Panoramic views of the town reveals that it is built on a hilltop. The mist clears and Toledo appears like a city on clouds. Our orientation included a walk through the town to view its massive cathedral. Like many cities in central Spain, it was under Moorish control for a long time.

Despite that and the subsequent “re-conquest” by Christian forces, it remained a city of tolerance melting Christian, Muslim and Jewish influences. In fact, one of the very important thing that occurred was the facilitation of translating texts between Arabic and Hebrew into Castilian – thus disseminating and preserving knowledge that would erstwhile have been destroyed. 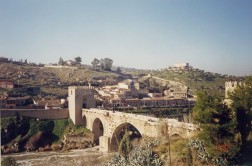 Coming out of the fortress town, we crossed a bridge over a river that runs all around the town. It is winter and although there was no snow, it was nonetheless very cold. In Toledo, one can buy distinctively designed jewelry, characterized by its use of black and gold. This method has a name. Do you know what it’s called?

We then continued on our way southwards as we headed to the city of Granada. We drove past the Albacete set of traditional La Mancha windmills as we drove southwards. Too far to see but point is we stopped there for a quick photo… far away, so telescopic cameras might have helped… And by nightfall, we reached Granada.

Honestly, we should have opted to come on our own.

For a journey with a group did no justice to this city at all given all we had was a morning. Can you believe spending just 4 hours in Granada? Anyhow, we started the day exploring the former Palace of the Emirs of Granada. Originally a walled town in its own right, the Alhambra was not just a palace. It was also a cultural and knowledge center when much of Europe was in the “Dark Ages”. It was built in Moorish style – characterized by the use of mosaics although it was re-modeled into a Spanish Palace after the city fell to the Castillean Kings. 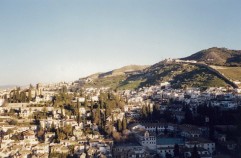 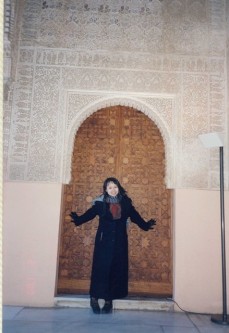 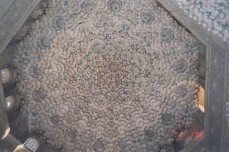 For nearly 800 years, the central and south of Spain was ruled by Muslim dynasties that splintered into numerous emirates and ‘Taifas’ (sort of Earldoms). Granada was one of the most enduring and its capitulation led to the formation of the Spanish monarchy, which within a couple of decades would commence building a global empire. Christopher Columbus is said to have signed his agreement with the dual monarchs who financed his expedition here. Actually it’s quite some story about the negotiations and how he got his charter if one looks it up.

Warm arabesques adorn the arches of the walkways and windows. The Generalife is palace of water and garden. Imagine the ladies of court and the emir residing here in the warm summers amidst the fountains and cool from the trees and manicured bushes. Beautifully designed interiors for the emir and his harem of ladies and family. It was certainly a grand palace to visit and not to be missed if visiting Granada. A true wonder that has been awarded world heritage status.

As much as it was short, we recognize that someday we will have to come back to do an in-depth exploration of the city’s other sights. But for this journey we had to move on.

So, on we drove down to the coast – Costa del Sol. We were put up in Torremolinos, a lovely seaside town along the coast. Now we can imagine in the summertime it would be bustling with sun seekers. But since it was the late afternoon when we arrived, hence not much time to explore the beach. Instead, we joined an evening visit to a “White village” – where the houses are painted in white. 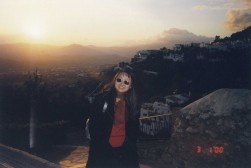 Mijas is the name of the village that we visited, though it seemed to be very commercial with lots of souvenir shops. It is located on the hills that lined the Costa del Sol where we enjoyed a good seafood meal while savoring the setting sun. The revelry continued late in the evening but we had to retire early, for it’s time to take a break from Spain, as we set sail for north Africa. Read here for our adventures to Morocco. Don’t lose your wife there! 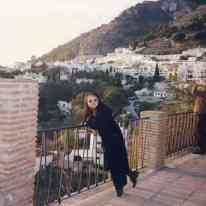 The end of our Moroccan journey was a short ferry hop from Tangiers. And a 3-hour drive later we arrived in the Spanish city of Seville. It had been 6 days of fun in Morocco and now time to return to continue exploring Spain. 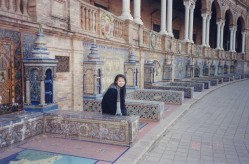 While in Seville we started off with the Plaza de Espana, built in the 1928 identifying the 48 provinces of Spain. Each province is represented by a mosaic tile designed featuring unique scenes, stories or traditions of that province. The four bridges in the center are also adorned with ceramic tiles and represent the four Kingdoms that eventually amalgamated to form Spain. 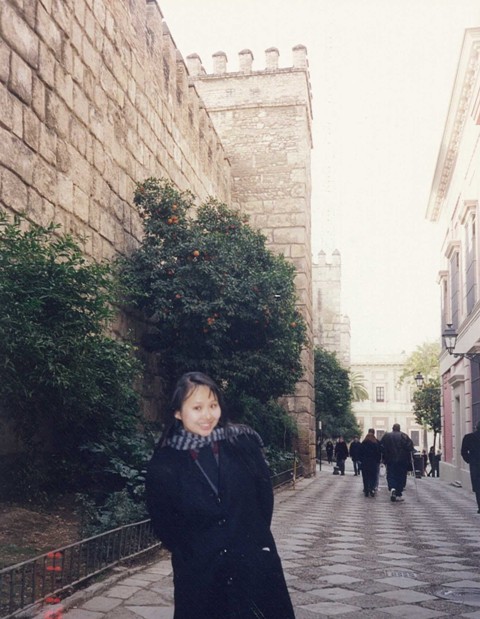 Seville is an old Spanish city and we spent the night here. It has been nice so far – despite the cold. Because we had just completed the journey, we could feel the contrast between Spain (Europe side) and Morocco (African side) is so drastic. It’s truly a different world. 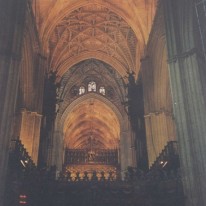 For an orientation to the city, we walked along the old city walls before visiting Giralda Cathedral – reputed to be one of the largest in the world – the others being St. Peter’s in Rome, St Basils in Moscow…

One would note that the roof of Giralda Cathedral is ornate. And inside the Cathedral is a mock up of the tomb of Christopher Columbus (would he be Spanish or Italian since he discovered the new world?). The stained glasses of the Cathedral are pretty impressive too aside from the high vaulted ceilings.

Once again it was truly a pity that we only explored a small section of the city. As literature on the web and the experience of other travelers attest, there is so much more to see and do in this city. And definitely a city to return to. But it was once again time to move. This time we are headed (here) for our short sojourn to Portugal.

Leaving Fatima behind after a short whirlwind tour of Portugal, we traversed over the mountains as we headed back to Spain and into Salamanca. The snow had set in! Our guide was kind enough to allow us to stop and take pictures in the snow… you know tropical folks don’t get to see this often and back then it was still a novelty. Arriving in Salamanca, we oriented to the city before heading for dinner. A university city, it was first granted royal charter in 1218 and received the title in 1254. While we only had the night here, we did steal out downtown to the Guadalquivir river and the old square. Yet another city we touched very lightly…

It is the end of the coach journey, and we were crossing over yet more mountains on the way back to Madrid. Along the way we stopped to have a view of the fortress city of Avila with its 88 watch towers. One of the fortresses that held the Moors south after being built in the 1080s.

Otherwise the whole of Spain would have been dominated by them. You’ll need to know the towers of Avila are 10 feet thick and 40 feet high. Quite impressive today and probably can be the source of inspiration for many a movie! 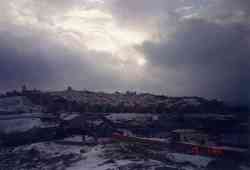 Today if one comes here at night, one might catch a glimpse of the towers and walls being illuminated. Some literature suggests this is the largest illuminated monument in the world!

With this quick stop, we were on the way.

This drive journey had been an experience for us. We had opted for a coach experience rather than an independent journey at that time, since it was a honeymoon afterall. Who wants a lot of hiccups along the way when one starts up on a path to marital bliss? Perhaps it’s time to rethink this. Time to do a more in-depth exploration of Spain. Like its neighbors, it has so much history, culture and culinary delights. The recent years had been economically hard on the country. Perhaps more tourism inflows can help!