Our story of Perth is not about the attractions within the city. The city has in fact grown quite a fair clip since our journey there. Thus we are not likely to be offering much value in terms of sharing what we saw more than 15 years ago.

Rather, this is the story of how we explored the “surrounds” of the city. But before we begin, let us take a look at the geography of Western Australia. Perth is the capital of a rather large state, in fact the biggest of them all.

It also has some of the most diverse geology too. And definitely a major contributor to mineral extraction. We believe this would have changed the landscape in these past 15 years.

Now if you look at the map, you will also notice the distances. And it’s not small. Thus the surrounds that we refer to are easily a hundred kilometers or more from the city itself. Recall that Australia is actually a continent?

You would have read about our outback journey to the northern shores of the state (here). But the sand beaches and river gorges are not the only attractions in Western Australia. About an hour’s drive north of Perth (~190km) are strange formations in the sands along the beach. Known as the Pinnacles, they were formed due to the

retreating seas from the last Ice age. The seabed back then was made of limestone, and as the sea retreated they were exposed. Some of the limestone were washed out to sea, but others remained leaving formations laid out in the sands.

Some of the formations are really large and the area that we were able to access was but a tiny portion of the entirety. We had driven here on the way back to Perth and first circled around before being dropped off by Carol for our own exploration.

These natural stone monuments are located approximately 4km from the beach. As they rise out of the sandy desert, they really looked like the remnants of an ancient city, built perhaps by some strange ancient civilization! Some say it’s best to visit at sunset or with the full moon, although we were there at about late morning and the blazing sun made the photos highly contrasted. Definitely a must see.

Now all the sand dunes along the coast should lure you to them. Unlike the ones in the desert, these are rather fine and powdery. At Lancelin (~160km from Perth), we made a pit stop to do some sand boarding. The tall sand dunes provided the perfect place to practice swooshing down a wall of sand.

Now to get to the dunes is a challenge, since you’re likely to take two steps forwards and one step back…(hmm is there song tune to this?).

So, why walk if you can take a 4WD drive to the dunes?

There comes in “big foot”, said to be the world’s largest 4WD tour Bus (heheh at that time we think). It was made by the owner himself over a period of a year, or at least he claimed while driving. We nodded in agreement because you don’t argue with the driver. At least not when the bus was tilted almost 45° on some parts of the drive. In any case the large tires made it a breeze to traverse the sloping and sliding sand.

Sand boarding is indeed tough! You first need to carry your board to the top of the dune. Then you sit on it and let gravity take its course. But this is not easy. Because for some of our fellow travelers it did not slide well. Imagine being “stuck” halfway on the slope! The trick, it appears is to wax the bottom of the board. Now isn’t that the same with us?

Lancelin is also a recognized worldwide venue for windsurfing. The coastal winds in the shallow bays provide the ideal spot for windsurfing all year round. Perhaps next time!

Then there is the Wave rock formation to the southeast of Perth (~330km). To get there was definitely a long drive. So we stopped at a little town called York on the way. If you look around this tiny town of approximate 2000 souls then, you’d think we are in the wild west of America.

Brown and yellow earth, they look barren and parched. And yet these great plains believe it or not are wheat fields! Hard to imagine right? Sure there are also bushlands in between but we were told this is part of the wheat belt. Will someone correct us? 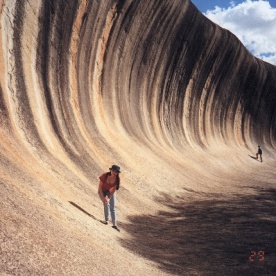 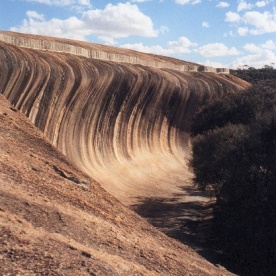 Wave rock is an actual location and is 110m long and about 14m high on average. Tectonic movements resulted in the creation of rock formations such that the sedimentation appears in a vertical rather than horizontal manner. Over time, this particular rock formation was shaped by water erosion (yes it does rain here too apparently) and came to its present form.

Located in an arid area, the rock formation was originally a water collection device, which gave way to tourism in the 1980s. That explains the stripes we see on the rock – the result of water running off the side for thousands of years. Unbelievable! And up to the 1980s it was said that the rock was used to collect water.

Nearby is Hippo’s yawn, where aboriginal women went for birth giving. There was also a story that was told to children to stay away from this area – we are told. Mulka will catch and eat you! Fortunately we did not have to contend with such a monster. And inside the little cave were hand prints from eons past. Looking back now. In all our journeys to Australia, we seemed to have missed out on the native culture!

What we have left out – is Margaret river and the southern side of Western Australia. And for good reason too. We’ve not been there! Yet. There is so much to see and do in Western Australia that it would warrant repeated visits.

From enjoying the compactness of Perth to feasting on seafood at its sister city Fremantle and Rottnest island, you can choose from a wide variety of activities spanning nature to shopping.

Be sure though to thoroughly immerse yourself in the great outdoors that is Western Australia!

This journey took place in May 2001

2 thoughts on “Getting in & around Perth”