An iconic feature of the southwestern United States has got to be the postcard views of the mesas at Monument valley. It is incredible to be told that these great free standing structures are the remains of what was once a large contiguous plateau of land mass. Would you believe that the large spaces in between the structures were worn away or crumbled by tectonic movements over hundreds of thousands of years?

According to archaeologists, this was exactly what occurred that we would see the great structures known as “mesas” today. Well, here we are ~360km northeast from the Grand Canyon and in the middle of nowhere as far as “civilization” is concerned. We had started off before 7am and driven nearly four hours from the south rim when we got here. 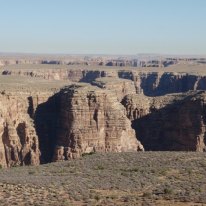 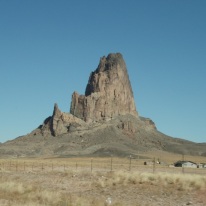 We are in the heart of Native American traditional lands. There are numerous native “reservations” – ie lands returned to the American Indians. This one’s managed by the Navajos, famous for being featured in the cowboy movies of the 1960s.

A new visitors’ center was in the process of being built as we came in, and one can really spend a long time sitting here contemplating the scenery if not for the searing mid day sun! And it can get blindingly bright too. Sunglasses are not a recommendation, they are a must! To gain entry to this Navajo controlled area, you need to pay US$10 per car (good as of October 2008) before getting to park. Start from the visitors’ center where you will be like us taking pictures endlessly, being awed and humbled by the spectacular views. 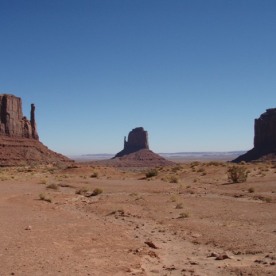 Because how can anyone be satisfied with just a picture or two of the Mittens? Anytime will be good to take beautiful pictures (see how our pictures turned out despite the blinding daylight), so long as you don’t point the camera at the sun. One can really spend a long time sitting here contemplating the scenery if not for the searing heat!

While you can take the guided tours, it is also possible to drive your vehicle into the 27-mile dirt track circuit. Low clearance sedans can also drive in like the Pontiac we rented, but at some points, it can be really tricky. Be careful on the way up at some points to avoid scratching the underside of the car! We did as we tried to drive upslope back to the visitors’ center. Fortunately this was a rental and they did not seem to mind when we returned the car…

Remember to bring along a hat, lots of water and make sure your car is fully fueled in these parts. To fully explore the valley would take the entire day!

The entire drive in the dirt road would take about 4 hours or more (if you take a lot of photos and hike). And how could you not. Look at the mesa from this angle, does it not look like a camel? Or perhaps it is more like a turtle with a hunched back? We’ll have to leave you to imagine it for yourselves.

We kicked off the drive and made a couple of stops along the way, but stopped after 1½ hours as it was already close to 2pm and we were feeling really hungry. Leaving the controlled area, we headed out to “town” which consist no more than a couple of motel/hotels and petrol stations spaced far apart from each other. Nearby is Gouldings Lodge, one of the few places to stay overnight. Shaded by one of the mesas, it was a cool area to hang out after the burning morning.

They have a restaurant that serves up traditional Navajo fare. We highly recommend ordering Navajo fry bread. The sandwiches we ordered came with the fry bread and they tasted really good, especially with pork and chili stew. For a moment, we really though they looked like the Chinese fried fritters though flattened.

As we had been driving the whole morning, we gobbled down most of what you see in the pictures. The Chili was not spicy to us, and we took it more as a vegetable…well different strokes…

We did not spend the full day here in Monument valley. Rather, we continued on our drive to Moab further up north (here). However, we have been hooked. If we come back, this part of the country’s where we’d be headed rather than the theme parks elsewhere. Where else can you see nature and be humbled by how small we really are? Sure there are many places in the world, but the vast expanse of desert coupled with mesas, they exude a different feeling. Come here to feel it. 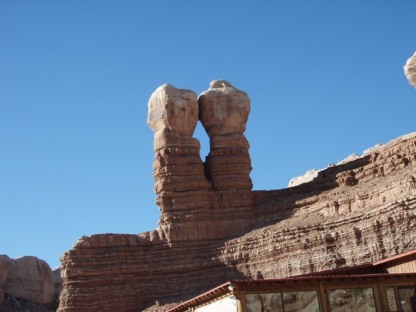 Driving in these parts is easy and the roads are surprisingly well kept. Petrol stations are far and between and you are well advised to ensure your fuel tank is fully loaded most of the time. Very important – bring a lot of water with you. Simply buy lots of mineral/distilled water bottles and put them in the boot or back seat. Cell phones might work, but you might not get delivery service coming out here.

It is safe, come and enjoy nature and be awed.