As you might have read previously, we had come up from the lake district (here). So if were reading our Wales road trip and clicked on the link to get here, perhaps you want to read our little story in the above link too?

We had sped halfway way up to Scotland the night before and today began getting about in Edinburgh. We had stayed in a very lovely B&B for the night. It was so idyllic with a barn full of horses that the owners kept, their lovely daughter happy to play with us. Perhaps there weren’t many other neighbors to interact with. 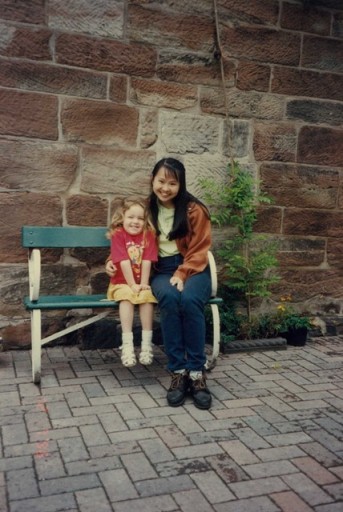 But now we are in the city. The capital of Scotland. 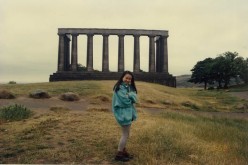 Carlton hill observatory. This is where many folks come to take photos of the panorama of the city. Indeed the views are gorgeous It is also an important location too, for today it is home to the Scottish government. Not at the peak, but all around its slope and base.

Its most imposing structure is the national monument that was constructed in the late 1820s. Built to commemorate the fallen Scottish soldiers of the Napoleonic wars, it looks like the Parthenon from a distant. Except it is in perfect condition unlike its inspiration back in Athens. You might think it was purposely built this way, but it was not. Simple lack of funds meant the construction ceased and has never resumed. Today it probably looks more regal this way, and we hope proposals to complete the structure does not come to fruition. 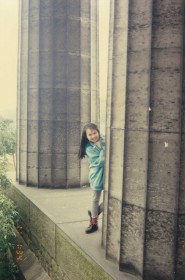 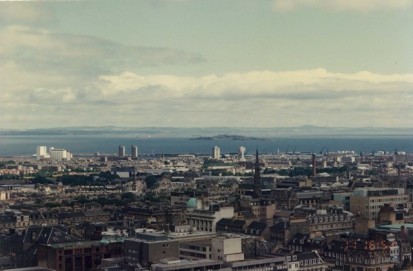 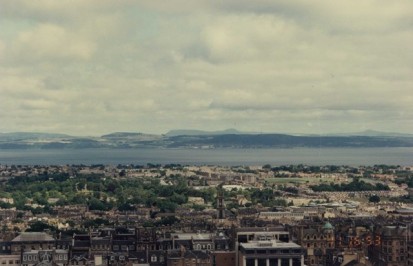 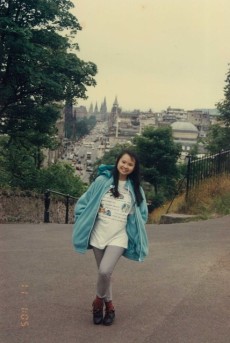 It is also home to some of the UK’s finest universities and Polytechnics. Lots of students from Asia flock to institutions here to obtain their degrees. We have quite a few friends that did exactly that. We happen to be there in July and it was graduation time. So there were some students posing in Kilts for graduation at the observatory grounds that day… wondered if they kept to the true Scottish tradition of not wearing anything beneath the kilt…

Now before one can get to the

One has to walk the royal mile. Because parking here can be tough to find. Along the way one will walk past St Giles cathedral. You cannot miss it with the prominent spire that looks like a crown. In fact they call it a “crown steeple”…

The city has had its share of violent struggles as the Scots attempted to keep the English from dominating their country. Of course today, Scotland is part of the union – hence the United Kingdom. But it does not stop the Scots from having a determination to keep their own distinct culture.

Now not much was known

about the castle site before the high middle ages, so most literature and recorded history of the castle began from the 1000s. And it has a colorful history, one replete with battles and sieges. One can easily observe that this fortification being 130m high would have a commanding view of the city. And indeed it was coveted location for its strength in lording over the city. Many a time it was destroyed and taken, only to be rebuilt.

Every August, Edinburgh castle is host to many military bands and contingents. The festivities is called the Edinburgh Military Tattoo. We were early – it was July and there were no activities at the castle. But as consolation the sentries waiting at the gatehouse to let the crowd of tourists get into the castle grounds happily said yes to Suan posing with a handsome guard in ceremonial uniform… attention! You just need to ask nicely.

The castle grounds are opened to the public every day. It is now more or less a museum and has no other formal function save the tattoo we mentioned above. When you are here, explore the castle slowly, such as taking a walk along the battery ramparts. But not before entering the portcullis gate. Can you see the spikes from the raised portcullis? This gate was constructed 450 years ago to ‘welcome’ any invading soldiers. Fortunately today one can walk through unmolested if one pays.

To access some parts of the castle, you have to pay again as the entrance ticket does not cover all the internal museums. Darn. In any case the opportunity to have a beautiful view of the city is free. From far we could see Calton hill and in the foreground is the Scott Monument (commemorating Sir Walter Scott). Ivanhoe anyone? 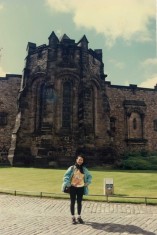 Past the Royal palace square one will come up to the Scottish national war memorial. And if you make a right turn the Mon Meg is just around the corner where the vaults keeping the medieval bombard (cannon) can be found. This famous gun we did not photograph, but she is said to be able to fire 150kg stones at a target.

Woah, beware all that are in the fire path of this venerable old dame! Perhaps she can rival the cannon at the Kremlin (here).

We spent the rest of the day walking around the city, with Suan looking for bargains in the shops along Princes’ street.

This is of course a mandatory segment of any journey though we have to say she did not come out of it much satisfied. You see, as younglings our budgets were limited and having stretched it a little so far in the road trip it was coming close to nought!

Edinburgh is a port city and it is possible to take a ferry to Norway here. One only need to look at the map to see that Scotland is in fact the closes that the UK gets to the Nordic countries. No wonder the Vikings came a visiting many times in the distant past. Perhaps someday we will play the reversed roles of “Vikings” sailing from Scotland to Norway…

The ‘homeward’ stretch awaits us.

It had been a very short journey to Edinburgh for us too. And for Mel this was the only spot of Scotland he’d touch though Suan had been further north (eg Isle of Skye). Indeed someday we will return to do a more in-depth road trip, before we reverse Viking to Norway!

It is quite a long drive back to Birmingham. However we would be making a stop before we complete this road trip. And it will have something to do with the Romans. Remember them? They were here in the UK too and the built a wall, make that two walls. Read the final leg of our road trip here.

We did a blazing trip to Edinburgh in July 1996