We have always fancied being able to capture beautiful underwater photos of the fishes and other inhabitants of the deep. This is a story about how we, at long last decided to try out our Olympus camera which is waterproof up till 5m deep. Or so they told us.

While not the first time, this would be one of the most rewarding times that we had used the camera. If you are still not already in the use of such equipment at this time (!), we would highly recommend that you consider one – as it will give you the opportunity to record your adventures in the sea in ways not possible before.

Especially videos. Now we’ve seen some encapsulate their phone or digital cameras in watertight boxes, but nothing beats carrying a camera into the water without fear of it being zapped out. Sure some of the latest phones have great cameras, but until they have true optical zoom… Redang would thus would be the ground which demonstrated the power of digital even underneath the surface of water for us.

Anyway, back to the plot. 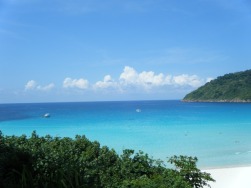 Redang island. Located off the coast of the Malaysian state of Trengganu, in the past many had come here after a grueling 11 hour bus ride from Singapore to the Merang jetty before taking a 45 minute boat trip across the sea. At the time our journey, the hour plus flight option made it all the more compelling to come. It would also mean that you spend more time on a holiday rather than getting to one. It was also the one and only time we used Selatar airport in Singapore to fly out of our little red dot.

The Marine national park covers nearly the entire island area and you need to buy a pass to be able to enter it. That’s what you have to do when you arrive.

It is a short drive from the airstrip to the Berjaya resort, one of a few that were granted permission to build on this marine park area. For this will be where we were based. Being nearly 45km from the mainland meant that all provisions had to be brought over. And being on the east coast of the peninsular, there is little shipping traffic, making the waters really pristine.

Getting into the water

Most times snorkeling trips come with the package you buy with the resorts. Ours came with a complimentary snorkeling trip and we topped it up from one stop to three for an additional 40 ringgit per person (good as of 2010).

We made our way out to the open waters and headed to some of the reefs to the southern side of the island, passing by a few other resorts. Once in water we were able to experience the beauty of the coral reefs. Point to note is that no fins are issued or allowed for snorkelers for fear of damaging the reefs when we swim around. So, it pays to be cautious not to cut yourself. Recommend you bring some rubber shoes. 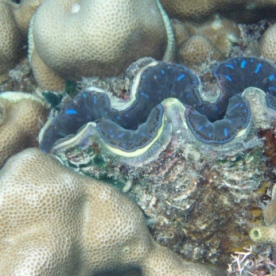 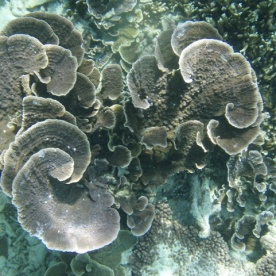 At our first stop, we could see many table corals at a depth of 3-5m. The water was remarkably clear and gave us ample opportunities to view the fishes that weaved in and out of the corals. Our camera was thus able to capture a lot of the action with great clarity. We also saw a lot of brain corals, shimmering in the sunlight as well as a lot of other corals that we are not familiar with. So far, so good. 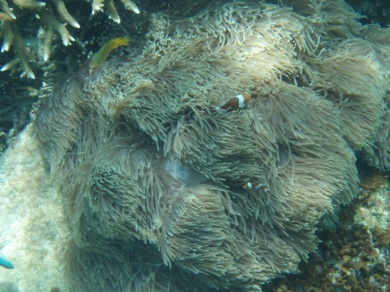 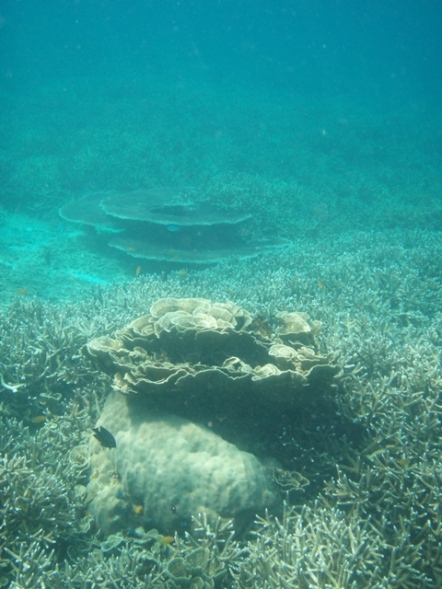 It is not a surprise, given that the island boasts of having 80% of the marine species of the region inhabiting its corals. Thus you will be spoiled for choice. In fact the inhabitants here are so unafraid of humans that they will swim right up to you to investigate what ape looking creature is paddling about on the surface. We had to “shoo” away numerous curious fishes (maybe they were looking for us to feed them) when taking photos. Incredible.

The next stop was equally amazing as we captured Clown fishes hiding amongst the poisonous anemones, darting in and out as they wish. It was a large concentration of anemones in one location and we had a field day capturing images using our new toy. Well not so new, just trying it out finally in the water as it was supposedly for.

Each stop took about 30 minutes, which was really all you can do – since you breathe through the mouth and your throat gets really dry after a while. Remember to bring along towels to keep dry when out of the water – the wind chill can get you down if you are not careful. 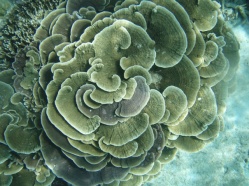 We also came up to a part of the reef which looked like a vegetable garden. Here are corals that form curled up shapes that looked like cabbage. For many meters in each direction there were these uniquely shaped corals that we have not seen before. Mixed in with an assortment of other corals, it was such a beautiful underwater garden! That snorkel experience was wonderful and unfortunately not long after our visit the park was designated off limits to facilitate the reefs to recover from damage.

Paddle out to sea

Aside from the marine park areas, the house reef of our resort also offers one the opportunity to do some exploring. Rent one of the canoes and get out to a floating pontoon that the resort usually positions out in the cove. There, you can swim in waters (or pose for photos) that are approximately 5m deep. Since there were no supervision from the resident sea sports center, it would be highly desirable to have your life vests with you. 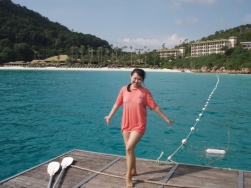 We took along some bread and fed the fishes – oh so many came to us!

In fact, it was almost a feeding frenzy. Some of the fishes were brazen enough to swim up to our hands and nibble, oblivious to the danger that they potentially could be in. How could they trust Mel not to reach out and grab them? 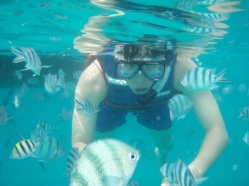 Well, for one thing many of them had little spines on them, so that would not be recommended in any case…

One might not find much in the way of corals though, and this was not the intention. The fun was to become the center of attention, the darling of the fishes in the deep blue sea for those moments when you had bread in your hands. Yeah we know we should not pamper the fishes and get them too accustomed with human feeding, but we can’t help it. And when you are there you’d understand why.

We were fortunate to had taken that short flight (1hr 15min) away from bustling Singapore to Redang. For that direct service has since been discontinued. So it’s back to the grueling bus and ferry journey. It was indeed a great getaway offering a mix of both the sea (for marine life lovers) and resort (for those gaming to laze by the beach). 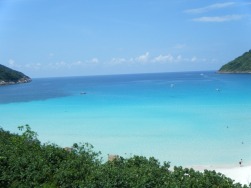 Even families with kids will find this island a great place to unwind.

Our original story had ended with a high recommendation for getting to Redang. However with the transport options trimmed, we can only say that it would still be a good place to get to if one is prepared for the longer journey to what we can consider as a gem in our little red dot’s backyard.

This journey was made in April of 2010

Actually we did not relate this but the island is home to a lot of local macaques. They climb all over, so keep your hotel windows or sliding doors shut and don’t leave your stuff hanging outside. One day we had a family sat in the balcony of our room (they were outside) watching the world go by. Well we were watching them watch the world go by…