This was the year in which Suan and Mel first went for a trip together alone! We suppose if one lived with a conservative family, it probably might not had happened! Our only trip together for that year was to the North Island of New Zealand. Mel had won a free pair of tickets after dining with colleagues at Jack’s place. We had tried to arrange to visit Australia but the since tickets were sponsored for journeys to New Zealand, we had a change in plans.

As young people with low budgets, we made do with Youth hostels or B&Bs (not AirBnB, a real B&B!) in all the places that we stayed. But with visits to the attractions, we chose to join day tours where possible and going on our own when the costs are too high. For transport, it was definitely public transport. The budget did not facilitate us renting a car!

Getting on in Auckland, city of sails

When we arrived, we made our way to victoria market, a bustling flea market near a park. There was not really anything to buy in this flea market, we were there simply for a walk through and spend the rest of a long day getting used to the time zone (after the near 13 hours’ flight and changeover at Kuala Lumpur).

Heheh, there is this one shot of us posing in front of a parking meter.

That was a novel thing to do then – we had not seen one in real life except in the movies… since it does not exist in our part of the world. It looks rather amusing to do this in hindsight because we probably look like dorks from outer space to locals…LOL

The waterfront at Hobson’s wharf – a kind of Fisherman’s wharf was mostly closed when were there. You might notice as we that there are so many yachts and boats anchored all along its waterfront! No wonder they call Auckland the city of sails…

Yeah, forgot to mention it was a Sunday. And back in those days the shops do close most of the weekend. Furthermore, it is now winter in New Zealand and the day turns dark quite quickly. Fortunately we stayed at the YHA Auckland right in the center of town, so were able to roam the quiet streets till late.

Now we have to remind once again that this journey was made at a time when the internet was nascent. In fact at this point, it was practically non-existent except for networks between Universities. So, we did the best research we could through offline means. That was how we came to venture out of the city – to an attraction at Rainbow farm.

Why this “farm” is a tourist location (duh), showcasing the range of cattle that is bred in New Zealand. Of course there is the sheep shearing demonstration – a must have at these shows. What was quite interesting was the different sheep that is bred for either their wool or meat.

One cannot miss out the sheep dog too! It was busy demonstrating how it herds the sheep and being really happy when we applauded.

A good place to spend about 2 hours posing with sheep or trying one’s hand at shearing them without cutting them accidentally and getting kicked in the shins.

Next stop – Skyline. This is situated on top of a hill that overlooks the city.

We got there by cable car – views from which were quite spectacular. One of the highlights here is riding the luge. This is a simple contraption that allows reasonably fast speeds downhill. However for us it was a scenic pace, making stops along the way to take in the views and having photos. And there was nobody else on the circuit today! Because of this, we were only able to make 2 runs till the ride closed at 5pm.

Situated on the Pacific ring of fire, New Zealand was born out of tectonic wedlock. Thus it is seismically active, evident from the continued quakes that occur from time to time. We were in Rotorua, having taken the intercity coach transfer from Auckland.

One of the mornings, we took a ride from our hostel to the Waimangu valley for a day trip. The package included guiding, transport and lunch. The Waimangu valley is definitely the poster icon for an active seismic area. There are steaming pools of hot springs everywhere.

We were told this part of New Zealand has porous limestone and combined with copious amount of ground water, produces hot springs. Some of the hot spring pools are beautifully colored. This stems from the minerals that are present in the ground and reflected by the light. If one observes closely, one might observe the deposits of minerals along the sides of the pools. And needless to say, the temperature of the pools are too high to venture into for a bath!

Bear in mind it can be a tiring stroll through the valley – and the fumes of sulphur could be quite overbearing. Do take care if you are unable to take the fumes and for those who are allergic to sulphur, this is NOT the place to be.

After our orientation in the Waimangu valley we went on a boat cruise on lake Rotomahana, where we came across yet more evidence of seismic activity. There were steaming river banks…! Can you imagine the ground beneath your feet burning you up? In some places, the heat has created a form of “volcanic mud”!

Thus do not be surprised to find your view being obstructed by the steam generated by the hot springs. We were shown a spring pool that supposedly looks like the Australian continent. Oh well…many pools like that can be found though in many cases you do need your imagination…come on, be a sport!

Now in the course of the week here, we did not encounter much in the way of traditional Maori culture. And it was on this activity trip that we visited an arts and craft “village” dedicated to showcasing the culture and history of the indigenous people of the islands. About the most significant for us though, is the greeting where nose touched. Heheh, tricky!

We have arrived at the Rotomana crater, the site of one of the biggest concentration of geysers (sources cited 65 of them) in the world. These geysers are hot springs that spurt steam/water high up like the “old faithful” in Yosemite NP for those in the know. They are quite predictable because again, this is caused by the meeting of ground water and super heated rocks from seismic movements. Remember we spoke about this combination earlier? The largest being Pohutu, one can truly witness the effects of all that coming from the center of the earth!

What one can do at Lake Taupo

Our last leg on this journey was getting to Lake Taupo. 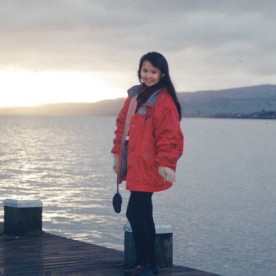 Well we spent an awfully large amount of our time by the lake. Partly because most if not all the sights are only accessible by drive, but also because it is the height of winter. On beautiful days though the lake can be such a pleasure to spend time walking amongst the mandarin ducks that converge by the large open spaces, oblivious to our presence.

Of all the things that we signed up for, it would be a cruise…and it was on The Barbary. It was a sailing yacht that was “transferred” to Lake Taupo. When we were sailing out into the lake, it was all calm and peaceful and then with little warning it began getting rough tossing us about.

There were only four tourists onboard and we all helped the captain to pull down the sails and steer the boat. Well, guess it’s never too late to enroll in a quick sailing lesson!

Honestly, it was actually quite fun though risky. Just so you know that Suan nearly fell over board as she walked about the galley – don’t do that when the boat’s tossing about!

Fortunately we were still able to catch a glimpse of the Maori rock carving that is set on a face of wall right on the water. That was what we came out here for…How it was carved there is quite a mystery. Since there are no visible points where the sculptors/artisans could stand. Perhaps they were suspended over the water! In any case, one more sight checked!

Now if you have not heard about this before, then joining a jet boat ride is a sure must. These boats run at high speed and at surprisingly little depth of water! They are said to be able to skim the surface of waters just 5-6 inches deep! The pilot makes fast turns and spins the boat so as to get the exhilaration pumped up in his passengers. And don’t be surprised that you get wet from this activity!

Yet another spot to explore while in Lake Taupo would be Huka falls, This is the biggest waterfall in New Zealand and we guess most of the water drains into Lake Taupo. As we did not drive, we had walked to the Falls, and this walk is quite long. Suan was quite tired as the pathway was winding and rolling. Not prepared to hike but the rewards are just. While we approached, the river appears calm but one can hear the roar from a distance. You simply need to be there to see and hear the mighty sounds the falls make.

One week probably did not do North island sufficient justice. And how could it?

Guess the morale of the story is this being an excellent introduction to traveling together as a couple. They say if you can travel with each other, then you definitely can marry each other! Who said that? Don’t know. All we know is that it seems to be accurate. At least for us! And little did we know that this would be the harbinger of so much things to come!

It was the height of winter in New Zealand when we journeyed there. And while we have seen quite some of the volcanic origins of the island, there remains yet more we did not cover due to budget and time constraints. The trick is to find our way back once again.

Will we? That’s a promise. It’s when that’s the key.

This journey took place in June 1995