Part of a larger story, this segment was the LA portion of our journey to Peru (here). Because of flight timing, we had a really long layover in the city. Figuring that it would be better to use the time exploring the city instead of staying at the transit area, we had booked through our agent a car with driver for the day.

This trip was an opportunity to take some time to finally visit the walk of fame and,

Don’t expect Chinese opera to be playing here though. LOL. Because while the theatre may appear Chinese, it was definitely not built by one! A showman had been creating themed theatres in the 1920s and this was a follow on from a previous successful one – of Egyptian theme. Little would it be known that this theatre would become an iconic attraction for the city.

It has seen numerous events such as premiere nights of block buster hits and even academy award ceremonies. Today the theatre is still in use for screenings. So if one wishes to, it is possible to actually watch a movie in the theatre. Today it boasts one of the largest iMAX auditorium in the world. 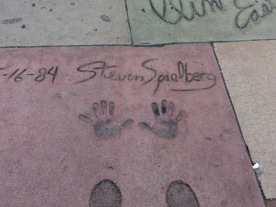 Aside from Marilyn’s autograph which we somehow missed, we manage to find the palm prints of Steven Spielberg and that of a child actress who name is Shirley Temple. You know her? 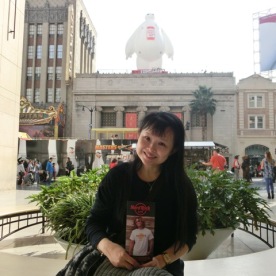 Next to the Chinese theatre is the Dolby theatre. The academy awards event takes place here each year. Imagine the red carpets and the stars coming through! For the rest of the time it is used for various other events. The back of the complex is a shopping centre where one can take photos of the Hollywood signage (which we forgot to). Darn!

But that isn’t all, for right along the walkways of the theatre are

No. Not street walkers. Heard about the ‘walk of fame’? There are more than 2600 of these 5-pointed stars embedded into the sidewalks of Hollywood boulevard. Today this walk of fame extends well beyond the area of the theatre up to 15 blocks around it!

The stars on the walk of fame are all from the music and film industry, public monuments to achievement in the entertainment industry. It was surprising though to see that the Muppets are here! Well, Wikipedia clarified that fictional characters qualify too… Look closely though. For each terrazzo tile has an inlaid brass emblem beneath the name of the star being honoured. These emblems differ according to a set of categorization ranging from film camera to theatre work.

And here is the Star dedicated to the recently passed away actor/comedienne. Always remembered for his role in many movies now considered iconic (at least to us).

For our case, Mel awarded Suan an award too! She poses with her award statue but she will probably need to buy her own tickets at the vintage looking booth around the corner for the awards ceremony! We would have stayed longer hunting for more stars, but time was ticking and we had to move on.

So, on we drove on from Hollywood towards Rodeo drive. Did not stop as we did not intend to shop. Just a drive by would suffice, for Suan was too tired to open her wallet. That by the way was an exception. We headed towards Bel-Air where we could only drive through the houses in the lower part of the hill. The really expensive homes further up are gated and not accessible. Our guide told us that we cannot stop here even for a quick photo because he might get into trouble. Not sure if that was a ruse to stop us from getting off…

But the day was almost coming to an end. Daylight we mean. It’s November and the days are shorter. But we are not done yet! For all we want to do is have some fun and to see the sun go down over

The final stop of the day is at Santa Monica was focused on the beach. Here, we took a walk to enjoy the evening sun amongst windswept trees bending inland. Here there are surfing waves and it is a sport that seems to attract lots well built folks. And over in the distant one can spy the Pacific coastal highway. Someday we will drive along that all the way up to San Francisco – yeah the Big Sur…

It’s a public beach and lots of people were starting to come here as it was a Friday evening. That’s because there are plenty of picnic area and playgrounds. From our photos you should see that it is also a very wide beach, in the sense it extends well inland. While the sand may not be powdery soft, it was still a pleasure to walk barefooted on. A constant breeze keeps one cool, and especially at this time of the year bring a coat. It will be useful.

We walked up to the pier which is filled with eateries to choose from. There is also a ferris wheel and roller coaster in the small amusement park which made the pier look jammed pack and overflowing. Talk about fully using available real estate. 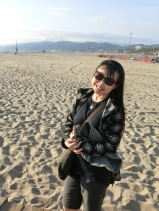 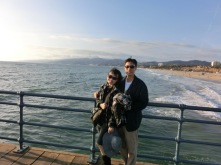 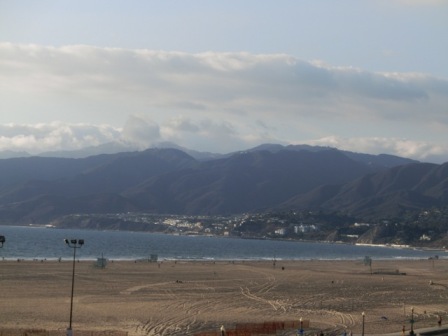 Yes we know there are much more to see and do in Los Angeles. But you see we only had about 8 hours of layover here. Considering that amount of time, we had done well we think. Perhaps in another journey we can layover for longer than a day and do the city some justice.

It was time to get back to the airport. The flight’s waiting for us! Our maiden journey to South America is about to begin. Check out our stories in Peru. That journey ticked off so many bucket list items for us!