Like its neighbor and separated twin, the Czech republic was formed in 1993 when the former Czechoslovakia split politically forming two separate nations. If you had read our stories on Austria (here) and Slovakia (here), you would know that this country was part of the dominion of the Habsburgs. You may recall they owned and operated a multi-ethnic continental empire like a business… it gives meaning to the word business empire doesn’t it?

Today, the Czech republic is very much on the tourism map, known for castles and beers. You do know the world Pilsner is derived from the Czech language. Right?

We had made our way from Vienna and keen to get into the capital of this country. But before we could get there, the little village of Lednice got in the way. A UNESCO heritage site since 1996, we were there to see the,

Home of the Liechtenstein family

Now if you also read our story of Liechtenstein (here), you would also know that aside from the Habsburgs there was also another family that was pretty much ambitious in carving out a mini business land empire. Although they were not as successful as their patrons, they came close.

But they were not sovereigns, happy to remain proteges of this more famous house.

While they are said to have more than 40 residences in the region, it is here in Lednice that was the seat from which they ‘directed’ operations aimed at increasing their territories, influence and wealth.

Lednice was abandoned by the family after WWII and along with their many other assets, were appropriated by the new communist states that rose in the aftermath of the conflict. Thereafter the family retreated to the little princely state that bears their family name.

Today one can enjoy the beautiful grounds and imagine how influential this family once was. Local falconers offer their birds to you for a picture, or you can try to feed it as it comes flying to your outstretched arm. Suan was not keen on that in case the falcon miss… But that was just a short stop for we were truly eager to get to the, 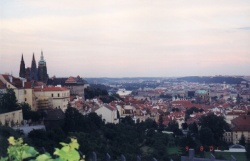 No pun intended. But in a way the city seems to be non-conformist and a little hippy too. Well don’t quote us, just ask all the other bloggers who’s written about their experiences in the city! Capital of the Czech Republic, Prague is that pretty city that has existed more than 1,100 years. It was the capital of the old Kingdom of Bohemia, arising from the many migrations of the Germanic and Slavic tribes in the so-called dark ages of 500-1000 AD.

Like Budapest, a river runs through. And as we arrived rather late, it was dark and we adjourned to our hotel for dinner. But that did not stop us from getting out in the evening, for we went for a cruise along the Vltava. Which is something you have to do. For it was fantastic to see the lighted historical buildings, though it did not turn out well in our photos. Gotta work on those skills…

The bulk of the time we spent in the Czech republic was in the city. To be sure, the city has surely changed a lot in the last 16 years since we were there. For example the most recent Instagram photos of the “dancing house” did not exist at the time we were there. Google map says the city is nicknamed the “city of a hundred spires”. Did not manage to find time to count and will not challenge it. But it sure was wonderful spending some time around the old the Town hall (constructed 1338), which is next to a large expanse of space where throngs of tourists come to enjoy the pretty buildings ringing the square.

Only time will tell

One famous section of the old town that you need to visit when in Prague is the Astronomical clock. Do you know that it is more than 600 years old? While it has been repaired, embellished numerous times throughout its history, the clock’s oldest parts date back to 1410. Over the centuries additions were made, such as the form of a planetarium, showing the relative position of the Sun and Moon. For enthusiasts, the dial of the clock even spots the zodiac signs. 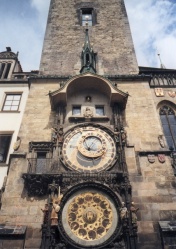 And just like clocks in Switzerland and Germany, there are animated figures moving at the top of the hour. We stayed for the full hour just to see all the figurines move and to record it on video.

With the numerous cobbled streets that lead to the square, there are many nooks and crannies to explore – perhaps a little bookstore tucked away in a small street or a little gelato offering sweet ice in the sweltering summer heat. Hmm, after these many years, we wonder how much of that had changed? Will someone be able to tell us? 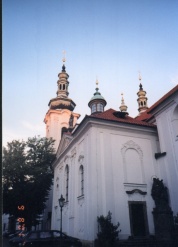 We started off visiting the former place of pilgrimage with a copy of Santa Casa built in 1626-31, along with the Baroque Church of the Nativity of Our Lord that was added in 1734-35. The Loreta treasure it is known as. And there are many valuable liturgical items stored in the treasury, with one the so-called Prague Sun. It is a monstrance weighing over 12 kg and embellished with 6,222 diamonds. It was a gift from a countess who received that large number of diamonds from her husband during marriage. Guess diamonds may not be a girl’s best friend if the countess gave them all away?

To get around we had help. There was this mini “train” that runs around all of the attractions sites on this hillier part of town, which was a godsend to those who had difficulty walking the distances up and downhill.

Prague castle was built here the 9th century, followed by a Romanesque palace in the 12th century. In the 14th century, during the rule of Charles IV, it was rebuilt in the Gothic style. The Royal palace was re-built to the current shape under the Jagellos dynasty at the end of the 15th century. However castle grounds were closed by the time we got there since it was late in the evening when we arrived, so could only jostle around at the gate and imagine what is inside. 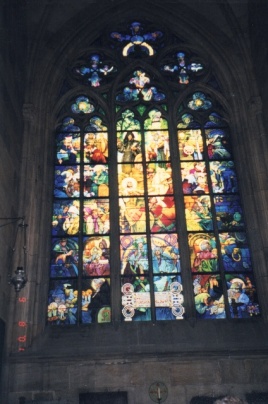 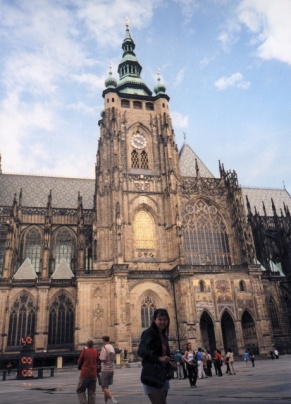 The Cathedral of St. Vitus on the other hand was open when we were in town and where the tombs of many Bohemian Kings are located. Its construction commenced in 1344 and only celebrated its completion nearly 600 years later in 1929. It is still an active cathedral so expect a lot more locals in there too and be quiet.

To be honest there was one other bucket list item we did not complete. And that was to walk the Charles bridge and touch the statue of John of Nepomuk. The plaque beneath his statue has been rubbed so much that it looks shiny and new. It was supposed to have led us to return to the city. Now we have reason to return. Seems like NOT rubbing it has the real effect of bringing one back to Prague!

It was not a long time that we spent in Prague. But it was all fruitful and enjoyable. Two days in this city is conclusively insufficient. Back in the time we were there the country was just opened and thus navigation relatively raw. Well today that’s different. How wonderful the travelers today have it. And yes we did stopover in the town of Pilsner to enjoy happy hour.