Most ladies must have used one form or another of Lavender products. From cosmetics and creams to personal care products such as shampoo to consumer products such as Lavender flavored candies, this shrub casts a long shadow across a variety of things we use.

Do you know that Lavender is plant with various species that thrive at specific altitudes? Lavendin, the cousin of Lavender that grows at lower altitudes does not have the same herbal attributes of its hardier cousin.

Our trip to the south of France gave an opportunity to see the shrub in all its glory in the summer. Specifically in the Provence region, the long drive across France ends in these mountainous regions of rolling hills and highlands.

Our base is the city of Avignon, perhaps known for the nursery rhyme “on the bridge of Avignon” – anyone? Well, just so you know that the bridge (Pont Saint-Bénézet) lost most of its structure in a flood in 1669. Hence not really a bridge anymore. For a fee you can get on what remains but the best points to view it is from the side or the opposite side of the Rhone River. 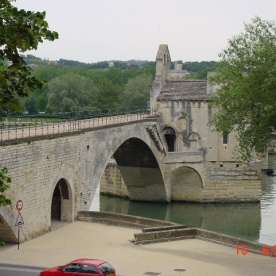 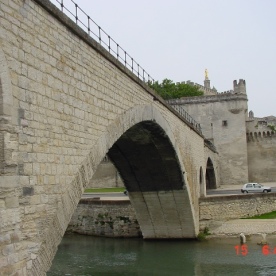 From Avignon, we took daily drives in specific “circuits” to explore the fields in the different villages and counties.

How did this shrub native to the Southern Alps hundreds of kilometers away became such a big industry?

In the 16th Century, peasants in the Provencal area began extracting Lavender oil to treat wounds and expel intestinal worms. The fact that the region is a mountainous region of lime stones actually helped. The plant needed loose soils and dry climate. The cottage industry that we visited along the way (there were numerous small farms with their own perfumery) employs the use of the plant extracts into any personal care product ranging from soaps to medicines!

We started with nearby Fontaine de Vaucluse, the source of the Sorgue River with one of the largest volumes (20,000 liters/second) of water surging through it from the underground springs after the winter thaw, making it the 5th largest river in terms of volume. It is said the temperature of the water never rises above 13°C.

Thus the region has the requisite water to support such vast cultivations of Lavender.

We are actually here on the way to the mountain top village of Gordes – a beautiful sight to behold with great views of the surrounding region. It is a short hop from here to the famous Abbey of Senanque that lies at the foot of the hills with its lavender extraction “facilities” from medieval times. Unfortunately the lavender here appears to be in a poor state! 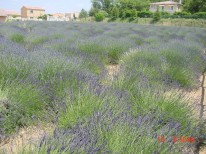 This is the Luberon, a hilly stretch of country where we made a pit stop at the ruins of Les baux Provence while driving through Lacoste towards Menerbes.

It’s really desolate this ‘alphills’ as they are called locally, in which such a fortification was built.

Finally hit jackpot! At Menerbes, we found the first patch of blooming Lavender and joined in the fun at one of the distilleries to learn how the oils are extracted. And for sure you will know that Suan made it a point to “stock up” on Lavender products ranging from soaps, essential oils to bags of potpourri…

Now there is more than one place to see the fields of purple and we drove towards Venasque through the gorges of Nesque. 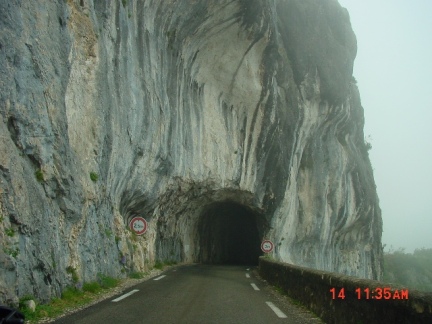 It was a very beautiful drive with hardly (actually none) any traffic on the “road” that was no more than a wide single lane. We are headed to Villes-Sur-Auzon, to make the turn towards the town of Sault, known to be surrounded by the fields of lavender than we so desperately sought.


The town was not unassuming and we actually tried to have lunch there – to no avail.

So, on we drove to Aurel and down to the plains in the vicinity of Mount Ventoux. Initially we were greeted with seemingly sparse cultivations of lavender, but the further we drove down the valley; a sea of purple began to greet us! Here at this lower altitude, it is the hybrid Lavendin that is cultivated and in full bloom.

We are actually now closer to Manosque, HQ of L’Occitaine and did not realize it until we saw the city signage. Naturally, the company has its supply literally on its backyard! No visit to their factory will leave your wallet unscathed. One new thing we learned – dried lavender can be used for cooking as an herb!

Lost in the Lavender fields

One of the most spectacular areas that we drove to was the region between Grignan and Nyons. At a slightly higher altitude then the surrounding, the Lavender fields were not all in full bloom. However, their splendor can already be seen from the ones that are. Imagine when they ALL bloom – for miles on end!


Located about 45 minutes drive north of Avignon, some of these places are only accessible by car. We did not see any tourist coach buses during our sojourn of the area (perhaps nowadays yes). On the other hand, we did see a fox hiding by the side of the road! You see, there is no heavy industry here and agriculture is still the predominant activity.

Numerous cyclists from both France and abroad were cycling amongst the fields. The air was filled with the fragrance of Lavender and there were almost no pesky insects! Thus we could wind down the windows of the car and let the gentle breeze flow in while listening to melodious music.

It was such a delight after a good lunch.

An interesting diversion as we drove back to Avignon. We decided to drive through the Vercors, yet another mountainous area of steep gorges and valleys. After stopping at a quaint village called Pont-en-Royans, we continued our way through those “wide” single-lane roads.

To the point we were pretty low on petrol! A little bit of history here: during the 2nd world war, French resistant fighters were holed up here as they fought the Nazi German occupation. 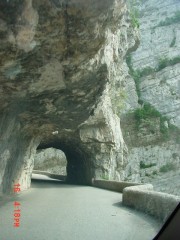 Most of the cultivated Lavendin in the lower altitudes bloom in the late June to July months. However, we were so lucky to have caught so much in early June. Lavender “gazing” is best enjoyed over the period of at least a few days. Best to stay in the region for a whole week! We spent the better part of 4 days in the region and were fortunate to have seen a fair amount. We hope this will inspire you to do a road trip to Provence, because it is truly a spectacle you will remember!

This journey took place in June 2005