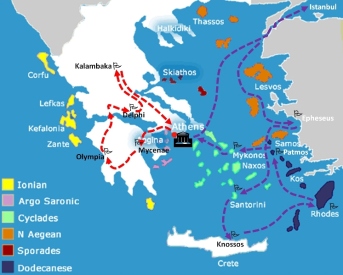 We actually only went to Greece once – in 2003 during the height of summer in August. But that journey was very memorable and can be broken into three parts.

Ah, Greece. In recent years there has been a lot of bad news coming out of that country. Bankruptcy, economic restructuring, deflation and high unemployment. How would the ancient philosophers turn in their graves!

It was high summer when we made our way to one of the ancient cradles of civilization. A time when the temperature can get as high as 40°C in the day! Fortunately it is not very humid, so it was not stifling. But the heat would still leave you scorched and burnt…so every day was pretty much seeking as much shelter as we can.

Today, Greece would embody a mainland that borders with Albania and Macedonia on the north and Turkey on the northeastern tip. All else would be the Greek islands. But did you know that the ancient Greeks colonized not just the current political boundaries but also a vast swathe of the coast of modern Turkey? Back in those days, it was known as Anatolia or Asia Minor…

In fact there were Greek colonies on Sicily, Cyprus and north Africa too. Some evidence suggests that Greeks were also present in the black sea and as far as the east coast of Spain! All these preceded the Roman ascendency and coincided with those of the Phoenicians. There has been celebrated stories of the Greeks beating the Persians and that of Alexander whose army penetrated as far as North-western India.

So, all in it was a triple whammy of history, geography and culture overload for Mel and Suan. Especially for Mel since he is such a history buff…

Of all the places to start, it must be Athens. Home of one of the strongest city states in the world in its heyday, the city’s iconic Acropolis is a must visit. Yes it is in some ways a tourist trap, since much of it lay in ruins. Perched high up, you need to find a good vantage point to view it.

Its current state came about over the last century as Greece was part of the Ottoman empire. Some of the damage was done by the Greek themselves, having targeted the Acropolis as it was an ammunitions depot for the Ottoman army in the 19th century.

Aside from the Acropolis, take some time to visit the various metro stations of the city. Built ahead of the 2004 Olympics, the construction took years through a mix of corruption and bureaucratic red tape. But it was also because the drilling of tunnels for the subway lines encountered artefacts and archaeologically important ancient sites! Today, you can see some of the preserved relics from the tunnelling works along the underground walkways.

Some say the Plaka district is too touristy. But we thought it to be rather charming. Many a day in our stay in Athens would be spent walking the streets that seem to snake continuously in all directions. We enjoyed our meals here and in the cooler evening time it was beautiful to watch the skies gradually turn dark and lights come on…

Any journey to Greece should not be without a ‘history lesson’. We all know by now that this country produced not only great philosophers and proto scientists, but also brought about a “renaissance” in the Mediterranean world between the 6th to 2nd centuries BC. Legends of demi-gods abound – such as Heracles – aka Hercules.

King Agamemnon, the leader of the Greek cities that attacked Troy was based on the Peloponnesian peninsula. Separated today by a canal just 75 feet wide (Corinth Canal), this was the base from which a thousand ships launched towards recapturing Helen. Mycenae was his kingdom and we visited the remains of this once proud city.

While not a city, Olympia is nonetheless important – not least because it was the site of the original Olympic games. But because it is near to Mt Olympia, home of the Greek pantheon of gods. Well we are not visiting the gods…Did you know that no women were allowed to join in the games? And did you also know that the men raced naked?

Sometimes people may speak different languages and practice different customs, but many a time they have similarities too. Like the ancient Chinese and Egyptians, the ancient Greeks consulted oracles to tell their fortunes or intervene in what is erstwhile their fate. The oracle at Delphi was the site of a very popular and probably rich temple where people from all over the Mediterranean came. Like religions today, the common-folk donated items of value (that includes money) and that is evident in the colonnades that adorn the ‘sacred way’.

At the northern part of Greece, we visited the monasteries of Kalambaka. These were first built in the 1500s as the monks practiced Hermitism. Structures were build straddling the peaks of the rock cliffs. Back in the day, it was not possible to access these monasteries and the only way was to be hauled up manually by a system of pulleys!

Having done the land segment, it was time to see how the Greeks had spread their influence across the seas. And the best way is to take

While there are numerous options to take the ferries plying between islands in the Aegean, a good introduction would be by way of taking a cruise of 7-8 days. That way you get to stop at a number of islands without the strenuous effort of changing hotels and moving luggage every few days.

We took a cruise with the Royal Olympic cruise company, and it was a journey that took us from Athens (Piraeus port) to Istanbul and back along the coast of Turkey to the Dodecanese and Cyclades islands. Actually there is so much to see and do that the cruise alone will not do sufficient justice. And if we must really tell more about the experience it’s got to be about Santorini, Mykonos and Crete.

There is so much written about Santorini that it bears no value to do the same in this essay. Rather, it was to describe to you how we had a very memorable stopover despite how short that stay was. The blue domes of the whitewashed houses remain in our heads till this day. If we return to Greece, it would definitely be a stay of around a week here.

As another source of great ancient Greek power, Crete deserves more mention than we normally find on the web. Sure, the palace of Knossos is in ruins now, but the Minoan civilization predated that of the mainland by nearly a millennia, so that explains the myth of the Minotaur.

In Europe, Greece is one of the must visit countries if you enjoy a good dose of history, culture and luxury. The food’s good and the weather is mostly bearable, even when it is summer. We for one would like to return and we are sure many too will after reading all that is about the country in the web.

We tell you, it’s all true.