For nearly a decade, a great undertaking took place in Zaanse Schans.

A great many windmills and old buildings from the nearby “industrial” belt was transferred to this location. It wasn’t old steel mills or factories as we know today. It was the old weavers’ house, foundry, clog workshop, coopery etc. All industrial production houses from the 19th century. Of course 10 windmills are also here and they line up along the Zaan river.

Now Zaanse Schans was historically a sconce – a defensive barrier. This site actually held up against the Spaniards during the Dutch war for independence in the 16th century. Today it has been transformed into a living museum. In our main piece on windmills of Holland, we pro-offered how to make your way here. It is probably better to use this link for the most updated information.

Wonderful up close to the mills

It does not disappoint us each time to come to this world heritage site when we have visitors. The first time we came here was in late spring of 2000. We could still recall the sunny skies.

We had taken a day tour from the many excursion companies in central Amsterdam. The coach bus left us here for a couple of hours. Alternatively we could have taken a canal cruise too. 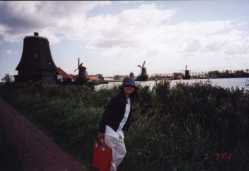 From then on, we came back each time to explore a different part in depth. How many times? We’ve lost count. They have names for each one of the windmills, and they had served very different ‘industrial’ purposes during their lifetimes although the majority had been deployed for the purpose of grinding seeds into oil. Here is the list of names:

If you venture further you can find the other two: De Bleek Dood (smock mill) and De Ooievaar (oil mill), further to the south and not within the museum area. If you want a view of the windmills in a row and you have a good camera, walk on the N515 road towards the bridge that spans across the Zaan river. Best spot here.

Now if you wish to enter any of these windmills, you pay an extra charge. Back in the day it only cost €1pp for entry. Not sure how much it is now! You get explanations from the minders about the workings of the mills, how the crushing and/or grinding works etc. Since these mills here are still in working conditions, these men and women continue on the age-old craft of maintenance.

During one winter, Suan took her good friends here. As you can imagine, the small canals around are frozen over on the surface! What a stark difference from just a few months ago when we were here!

It is not all windmills alone, for they did not exist in isolation. Read more here of the fight in our article on Kinderdijk. The intent of windmills in many instances was to power the pumping of water out of the waterlogged land. Fighting against water is an obsession of the Dutch people for hundreds of years. All this is so that land can be dried and prepared for farming or supporting grazing livestock. And here you can see the living farms where cattle still graze. In spring, we saw little ducklings nestled with their mother along the grassy banks of the canals. 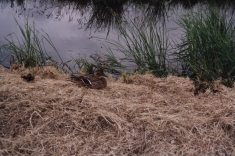 Well you can shop here too!

As we mentioned in earlier, many historical buildings from the industrial era of the 19th century were moved here. There is the usual cheese “factory” demonstration, where you can also sample and buy various Dutch cheeses. Then there is wooden clog workshop where the craftsman will lathe and carve out a blank shoe in a few minutes. The

se structures are utilized not just to showcase how products such as pewter and barrels were made, but they usually have adjacent shops selling souvenirs too.

And never too far away would be cafes and restaurants. You will never go hungry, thirsty or without souvenirs.

In the summer, the connected walkways between the buildings separated by little canals can be a delightful place to well – just walk around. Little corners with sculpted gardens and swans gathered for feeding. Just be careful of the goose. He “barks” to protect his little home!

For first time visitors, Zaanse Schans is indeed a good introduction and we had been proud to show our guests this unique cultural heritage of the Dutch people. However, there is more than simply windmills in this country. We hope this inspires you read more about other adventures and discoveries living in Holland. Look it up in the drop-down menu!