Like the hobbits, the move from Shanghai to the Netherlands was an unexpected journey. One thing that was vastly different is we did not traverse treacherous landscape.Rather it was a voyage of discovery for both Mel and Suan, as we embarked on a life so different that the learning from it still reverberate today.

The circumstances surrounding this move was dicey. In late 2001, the tenability of the business that Mel was helping to run in China had deteriorated to a point that the company bled money.

You see, running businesses in China is not a cup of tea. It is fraught with challenges of copycats and fakes. Even in the case of favorable legal judgement, it was an insurmountable effort to enforce. It was under these conditions that the company determined to exit the business altogether.

And so this led to Mel’s hand of closing down the plant, one that he had helped build over the course of his 4-year stint (read the China story here). Completing it all, it was destination : Amsterdam.

City of Canals, “coffee shops” and the red light district

Ah Amsterdam. When we first moved to Holland and told of our move to this city, it was normally greeted with either:

“hmm, if we visit will you take us to see the red light district?”

Do you seriously think that even back then (and this is more than 10 years ago), that the city of Amsterdam, I mean this beautiful city is clogged with addicts walking around like zombies? Or that there are ladies of pleasure waiting for you at every cobblestoned alleyway? Perception. That’s it.

Not sure how this came to be. But our vision of Amsterdam is one of lovely canals, small shops (soon overwhelmed with chain outlets) and cramped houses. Small and cute but quite a chore to try living in one. 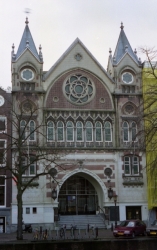 Very rarely as we walk the canals, whiffs of cannabis smoke come by. Not quite like that. In fact, the city has been ‘cleaned up’ for a few years in the words of Mel’s colleagues. And we are sure it has changed since – for the better we hope.

Those coming from Singapore or Malaysia would be familiar with the term ‘coffee shop’. In our (I mean Singaporean) culture, these words conjure up a location where many stallholders set up their food outlets, hawking them. Usually these are housed on the ground floors of the residential apartment buildings built all over the little red dot. And yes there is the iconic coffee stall, serving all manner of the locally brewed caffeine injection (in cups of course). Sort of like a convenient food court downstairs where you can savor cuisines from across cultures in the little melt pot.

NOT SO here in Amsterdam.

In Coffee shops here, you can smoke “soft” drugs. I recall once that a China colleague had been on business trip here. He had wondered around the alleyways and came back to the hotel with some fragrant cigarettes. He had felt ‘really good’ after smoking one and was intent on bringing some home. Somehow we managed to talk him out of it. Wonder how that would have turned out if he did bring some to China…

From late spring (April) till the fall (half October), we usually have lots of fun strolling along the three main canals that run through the city in a semi-circle. You will find houseboats moored along the canals with cables linking them to the electric grid. Many are permanently berthed, but you may get lucky and spot one cruising the canals.

Lucky us, spending weekends just walking aimlessly after parking the car along one of the canals was one of life’s easy pleasures. Just like in England, sunny days are not the norm in Amsterdam. But when they occur, it’s really time to celebrate and be outside even if the winds brings a little chill. Quite a bit of the storied life of Amsterdammers revolve around the area bounded by the Central train station, the Damrak and the famed red light district.

Here are not only coffee shops, but also restaurants and bars with the shopping belt – Kalverstraat converging to bring out enormous crowds especially over the weekends. We spent many a day at the American bookstore buying cheap out of print books…

Our home here, the “Holland road” equivalent of Singapore

We rented an apartment during the three years and the first one was at Apollolaan. Now this is in the quiet south of the city – aptly named the “oude zuid”. Phonetically you should be able to guess it means the old south in Dutch. 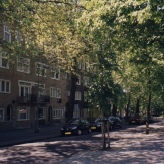 This is a highly priced and prized place to live. Not far from the centre of the city, yet rustic and spacious. None of the crowds you’d expect just 10 minutes away by tram. Now back in the day a 2-bedroom apartment here commanded a princely sum of €1800/month. Today it’s more like €2300-2500 for a decent sized and located unit. Not doubled but still a significant dent in anyone’s budget if you did not have rental allowance…

After a year staying in this location, we chanced upon a cheaper unit about 3 minutes away by tram from the first apartment – at Watteaustraat.

This charming area sits by the south Amstel canal. In all seasons it is a joy to stroll along it though honestly we did not really think much about that during the two years we lived there. It is also very close to a large train station and sometimes we take that to the airport instead of driving.

The days at home were spent planning for our next journeys, experimenting with our green fingers (not successful). Here you can easily purchase bulbs of Tulips, Hyacinth and Amaryllis planting them in small pots on our balcony. Seems like we will not be farmers in this life. 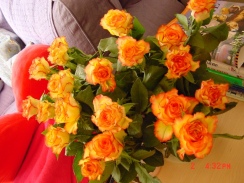 And for Suan, catching up on the sitcom serials from back home! You know, subscribing to anything is such a pain when you are outside of your home country. This is a learning you only get when you live outside your own country. See how we have transformed an empty apartment into a packed-like-sardines box? 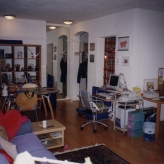 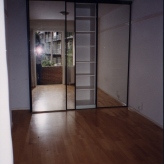 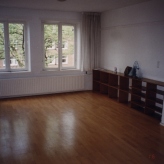 We had moved to this 1-bedroom apartment which had one of the original rooms knocked down for a much larger living room. But this did not stop people from visiting us…

Since Mel was at work for most of the day, Suan’s social circle initially shrunk to just him. Fortunately help was at hand in the form of the SNA. The Singapore Netherlands Association was a loose collection of folks who had migrated to this country either with their Dutch spouse or on assignment for a significant time such as Mel was. So we joined this association for a number of events and linked up with some of the others.

And so in these years Suan built up not only her culinary skills but also her network of friends who lives in the Amsterdam area.

They would have regular get-togethers to hang out. This eventually morphed into cookfests where each would bring a Singaporean favorite. Rotating amongst each other, the meet ups were held at the homes of the designated host.

The ladies were close enough to eventually become bridesmaids for one who got married. Just like weddings in Singapore, the bride and her minders would ride out for a photo shoot in her gown with the groom. In a time when flowers are due, see how resplendent she is with the blooms in the background!

The network was not limited to the folks hailing from Singapore.

Mel had made friends with colleagues and ex-colleagues from across Europe. And some of them do come by Holland (as they do via Singapore). We had picnics with folks driving through on their way to various camping grounds. Our neighbors from Brazil introduced us to friends from Malaysia. Mel organizes company events that draws Suan in…the weekends were never dull or idle. 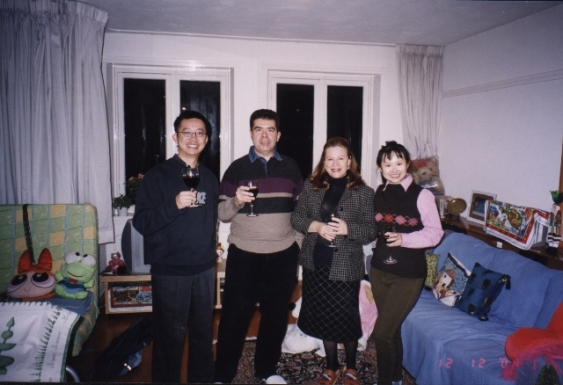 Yeah, those were the days!

Trusty “Silver”, our ride to the Benelux, Germany and France

One of the reason our travel handprint has been as diverse and detailed as they are on continental Europe is due to the fact that we drove the company leased car to its limit. The budget was a maximum of €30,000 for the leased car of 3 years. We had to choose a vehicle and accessories and pay the difference.

Initially we had a sporty hatchback, and we could have selected a sleek Audi. But we figured that with family and friends coming over, it was probably more practical to opt for an MPV. So came in this 2.2 litre lightning silver Opel Zafira. And it served our purpose well. In just over 1½ years we drove it, we covered well over 50,000km. Consider this : it is just a 15km drive for Mel to work, so most of the mileage went to our journeys!

In rain, shine or snow, our trust Zafira “silver” took us across a broad swath of Europe from our base that is Amsterdam. You see, within a radius of 500km we could easily range with Silver (yes we are those who name our cars). Since there are no borders, it was just a matter of driving through.

Within Holland, it would take us to places considered off the beaten path for some. From castles to Hunebedden (similar to runic rocks) to flower fields to enchanting rows of windmills, our journeys within the country was such a privilege. Look out for more stories on the sights we covered in our journeys from north to south of Holland! 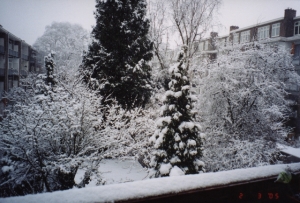