You might have read about the hike that you can make from Faber Hill opposite the Vivo city shopping area of harbor front here. While that stroll would have been scenic and close to nature, when you end up at the Alexandra arch, you do have an option to either continue on the trail towards Hortpark (here). Or you could turn left and “hike” on towards the cluster of modernity southwards.


Because you will not regret it.

Labrador park today maybe a nature reserve, but back in the day it was surely not. For here was a small hill that rises up from the beachfront. Now you might know that in the early days of our little red dot, we were a mainly entrepot station – ie where ships come in, dock and exchanged goods. You might not think it is an issue (and it still is today), but piracy was not an uncommon occurrence in water around our island. In fact, brazen as some were they could actually come on land to plunder and pillage.

So, coastal defense of the city was critical. Since back in the day the rest of our island was heavily forested, possibly the habitat of the Sumatran tiger… which somebody might have mistakenly called a lion a couple of centuries ago…

Fast forward to the 20th century, this location has evolved into one of the locations where the colonial Brits set up batteries (artillery pieces ok?) facing the sea. You’ve probably read a lot about how these guns facing the sea were useless when the Imperial Japanese army came thundering down overland instead… the ultimate form of positioning oneself in the wrong asset class…

Today you come here first of all to admire the beautiful views. For one of the key things to do is to take a walk along the Bukit Chermin boardwalk as you see the in above Google map. Along it is a creek that borders the Keppel country club golf grounds. This extends all the way out towards Keppel island and affords you a view of Sentosa’s western side. Particularly in the early morning as the sun rises, a spectacular vista opens up. After that it’s damn hot and humid. That’s the first tip. 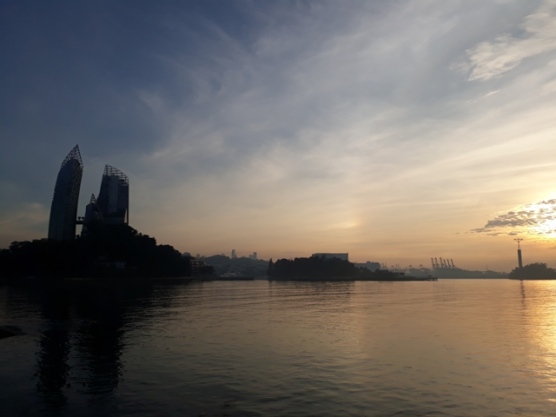 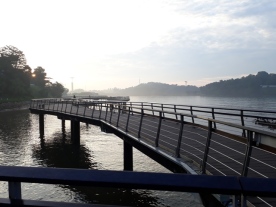 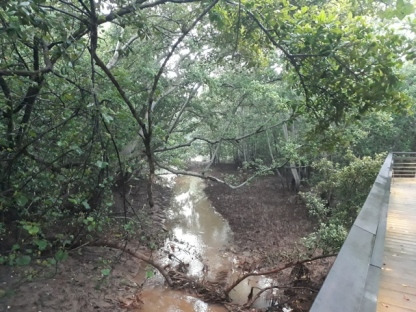 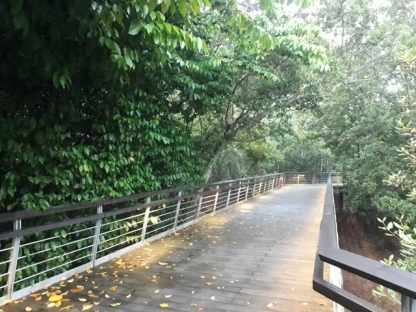 Not too far from the walk, one will see a small craggy lump of rock that towers up 5m high. This is the replica of the original Dragon gate teeth gate.

The originals were two very large boulders named 龙牙门by a Yuan dynasty mariner located in the midst of the waters between Sentosa and Labrador. But it was demolished in 1848 by the British colonial government to widen the channel that you now see between Sentosa and the mainland for access to the port.

To demonstrate how important this part of the coast was (and still is), one will find the red Berlayar beacon installed at the tip of the park facing Sentosa. Did you know that from here, it is the shortest straight line distance to the island? Care to find out how far that is?

But the highlight of coming to Labrador nature park though, is to see Pasir Panjang fort, alternatively called Labrador battery (remember not the power bank). One of nine, or was it eleven military fortifications and gun positions on the southern coast of our island, this one was to operate in conjunction with its twin Fort Siloso on Sentosa. It boasted of 6-inch guns that can fire and hit targets almost 15km away. Not too bad for its time, and surely don’t mess with them!

To support all these artillery, munitions must be within easy reach. And tunnels are said to have been built all under the hill. Today though one can only see the tunnel without being able to explore them. Well, they say it is not structural safe to go inside, but who knows what secrets could be locked away inside? Perhaps the tunnels do lead to Fort Siloso at the other end, and someone does not want you to get across without paying…