One of the many fascinating things about France is the relative abundance of beautiful palaces – chateaux (chateau is singular) especially all across the country. From large sprawling ones with large gardens to manor house sized properties, we could find them in most locales!

It was as if there was a real estate boom in the baroque or the renaissance era, where the wealthy built for themselves enormous and very ornate homes distinct from fortresses of the Middle Ages. For example, the Loire region has one of the highest concentration of Chateaux. Many of these palatial type homes were built by the landed nobility of the country, even as France’s serfs and peasants experienced some of the most wrenching economic conditions of high taxes, oppression and wars.

Any student of European studies will know that the 15th – 18th century was a period of near continuous armed struggle between two great royal families – the Bourbons and Habsburgs. Ok perhaps we simplify it too much, but many of the conflicts were linked in some ways to the two families vying for supremacy.

It was with such context that we set about exploring the valley in depth over a series of road trips. Being based in Holland, it meant a drive first towards Paris (~550km). From the most romantic city we kicked off at least 4 days of exploring the valley on each occasion.

Today we are able to see countless examples of richly designed and built palaces such as the Azay Le Rideau. With its verdant surroundings (vineyards and more), the chateau is set in a midst of a charming village with numerous Auberges serving great French food (we swear!).

Surrounded by a moat, the chateau (not large compared to the others) illustrated the Italian influence on France in the early days of the renaissance. You might know that famous “Italians” (there was no country called Italy before 1861) such as Leonardo Da Vinci resided in France for long periods of time. Much of the early French Chateaux design came from Italian Palazzos of the same era. It was only from the Baroque period that French designs came into their own and exerted its own influence in Chateaux design. 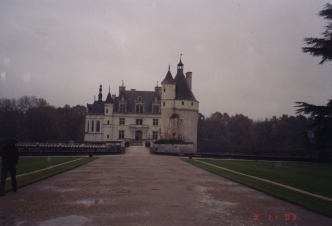 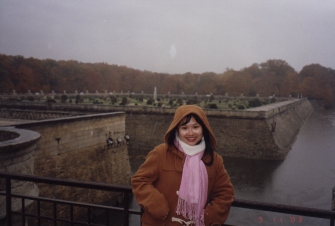 Chenoceau is known as the chateau of the ladies our guide told us as we drove into the parking for the day’s tour of this magnificent palace set on the Cher river. Built over a former mill, the chateau was “fought” over numerous times, changing hands within the nobility (even royalty such as Catherine d’Medici owned it at one time too). Each successive owner went on to embellish the chateau further. If only we had some more time to walk in the gardens. But the day we came it was a wet and cold November… 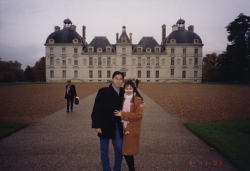 Not to be confused with Giverny of Monet fame (it’s spelt totally different), the seeming quiet chateau Cherverny has a fascinating history behind it too! Like most other properties it changed hands in accordance to the winds of politics, but stayed mostly in the hands of the Harult family till this day.

It was the first to be opened to the public and today the family still lives in the higher floors of the chateau.

Not all the chateaux palatial homes were built originally as such, and nowhere is it more evident in the following places where efforts were made to “gentrify” the battle ready fortifications.

One such place to visit is Chateau Langeais. Originally a fortress overlooking the opening of the Roumer River to the Loire, it was sold to a private owner in the late 1880s and restored. He bequeathed the chateau to the Institute de France and it is opened to the public.

The little drawbridge entrance is obviously not functionally a fortification but a quaint reminder of the original intent of the chateau. We actually chanced upon this palace while driving along a misty Loire one morning! 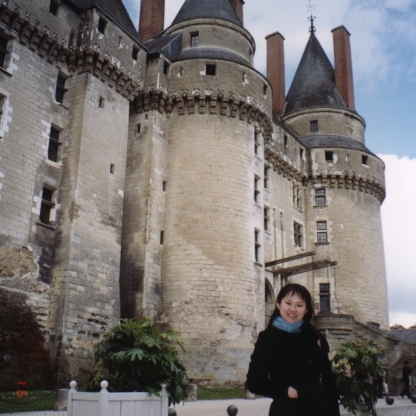 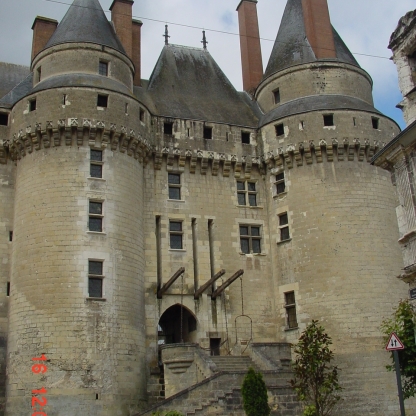 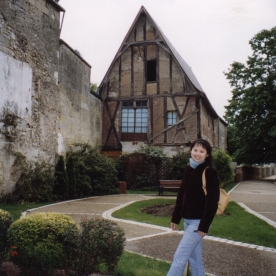 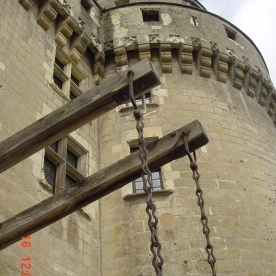 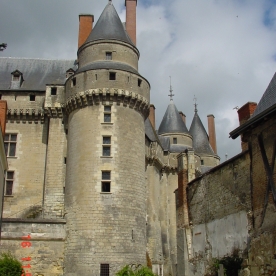 For us, the chateau at Saumur cannot be missed because it is set on higher ground overlooking the town of the same name. Today the town owns it and it is a museum – of guess what? Horses…

Now we did not explore the chateau castle, preferring to enjoy the view for free from the outside. In any case the pictures are better and majestic when you can see the whole chateau isn’t it?

If there is any fairy-tale castle, it is said that chateau Usse is the one. Some say that the chateau resembles the place where sleeping beauty resides, or well is in a slumber. 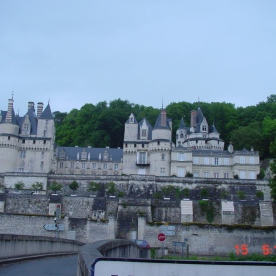 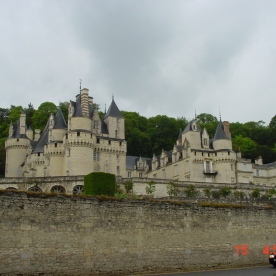 Hopefully she is not awakened by the footsteps of the many folks that trudge the palatial gardens and beautiful interior. Again to prove that we’ve been there a picture of the entirety of the chateau is presented on this page. Afterall, if we shared mainly pictures of the interior, you’d soon be lost for which chateau it is. They may not look so different inside…

Angers – is not the plural of being angry. Overlooking a strategic bend in the river Maine (hmm, did the state get its name from this river?), the Romans are said to have set up shop here. It’s a very large fortress, and not much of a chateau you’d come to expect in many ways. Like a raging strong bull, they tried to place flowers on him. So you see what could have been a moat of water is now converted into manicured gardens… 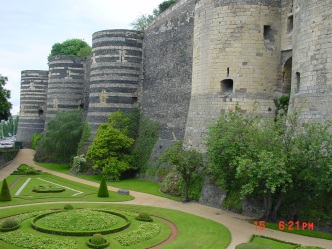 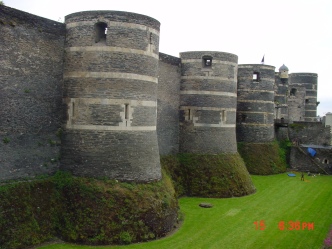 Speaking of gardens, as you should have read in a separate article on French gardens, the concept of gardens in France is not centred on flowers. Rather, ornamental green shrubs and plants are the norm – making it available to be enjoyed during most parts of the year. Geometric shapes are used very often and it is a real pleasure to behold from a high vantage point. Such are the,

We pointed out that the Loire valley is especially famous for chateaux, gardens, vineyards and good food. A good concentration of former royal residences dot the region. Visiting all the chateau we encounter is not an option (it is not exactly cheap), but well worth it especially if it has beautiful gardens – so decide well in advance through some research. 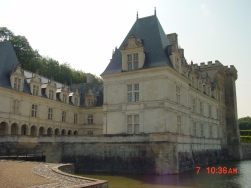 Chateau Villandry is one such place to spend some time in. In fact, if you do not have sufficient time and only one chateau can be visited then this has got to be the place. We fell in love with the symmetrical gardens which you can not only walk amongst but also fully appreciate from afar. Built in the 16th century over an ancient fortress, the chateau was rejuvenated by the Carvallo family in what we consider a most romantic story.

It could be considered the most beautiful garden in France with four main gardens and a few more for the family. As this chateau remains in private ownership there is constant renewal. At the time we visited it was said there is 1260 lime trees and nearly 52km of box hedges! All lovingly pruned by the hands of dedicated gardeners who love their job! Look out for it in our story on French Gardens.

The chateau Chambord on the other hand was owned by the royal family and built as a hunting lodge. Thus it has vast expanse of grounds (more than 5400 hectares) surrounded by 31km of walls. The design concept of the largest chateau in the Loire is said to have been hemmed by Leonardo Di Vinci. 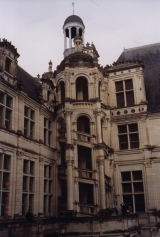 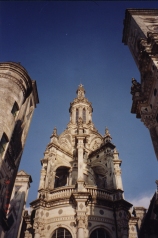 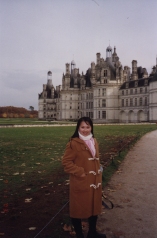 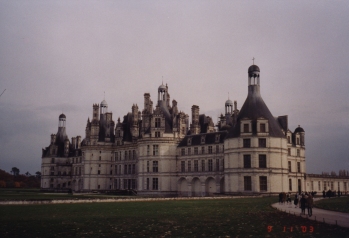 Interesting enough, the chateau castle has a moat which was the “fashion” of the times when it was rebuilt. But there are no defensive walls all around it! So it is a charming thing to walk beyond the chateau grounds to take in not just the total view of the palace but also the reflection in the waters of the moat. In case you are going, it’s at the northwest side of the palace. And if you observe closely, you will notice that there seems to be a lot of funnels on the roof.

Said to number 300, it was built to heat the 400+ rooms of the palace. Unfortunately throughout its entire existence, the chateau was largely abandoned, as it sat in an area without nearby villages. Over the last 400 years it would probably had been used for less than 10 according to some sources!

Visiting France without exploring its many chateaux is like being in China and not seeing the Great Wall. Many of the iconic chateaux are regular offers for day trips from Paris. If you drive, it would be even better to see the many others that can be found all over the Loire and other parts of France.

Experience a stay in a chateau or just visiting one will bring you a sense of history. For the more socialist amongst us, it may vindicate the social inequalities from which we have emerged from and continues to fight today! Thus wait not and be away to be the baron knight or lady for at least a day.

3 thoughts on “Chateaux of the Loire”