You know the distances in Japan are not all that small. But in 1 hours and 20 minutes we had traversed the distance from Tokyo to the town of Hamamatsu (~250km), at the western edges of Shizuoka prefecture.

This was yet another timeshare journey. However, on this occasion we did not manage to book the EKSIV resort. Rather it was another resort group that we managed to secure and it would be the last. We stopped using RCI since then. 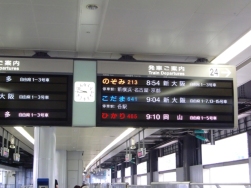 Always a pleasure to travel on the railways of Japan. It is so efficient and well organized. And to make it even more pleasant, the larger train stations are like mini shopping malls in themselves. Our journey begun at the Shinagawa (品川) Tokyo station.

There are many dining options here for your choice of takeaways. Here we tasted cheese flavored rice balls! The timing of the trains is impeccable. We had opted for the express train, which only made 3 stops throughout the ~250km journey including Shizuoka.

When we arrived, it was a little early (11am) to pick up the car (scheduled for 12pm) and we had to eat our bento box in a shopping mall.

Now we are headed first to a hotel stay overnight before getting to the week’s timeshare.

Now what can you do in Hamamatsu?

For one, you can visit the local unagi pie factory. It’s not really pie but rather more crisps and biscuits. There is a tour of the plant and you can view the dough being made into the final products and packed in the Japanese expected beautiful wrapping.

Alternatively if you are up to it, you can soak in the rich mineral waters of the Onsens in the area. We came up to the Hassan No Yu, a posh looking one complete with koi ponds and pavilions for relaxing.

Now one thing to see here is the sand dunes. At Nakatajima, the sand beach extends for out for a few kilometers. Now the pounding waves could possibly erode the beach away, so the locals have came up with an ingenious series of structures to prevent this from being too serious. There are also hardy plants that thrive in sandy soil that are planted, so all these helps. 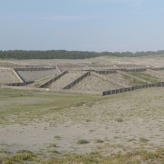 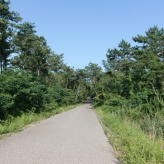 It is a nice stroll along the tree-lined parts of the coast and it was windy. Actually, in the news later that evening we heard that a few people were swept out to sea and lost! 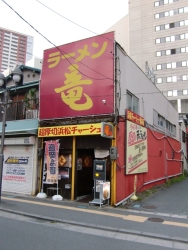 For sure we cannot leave out eating and we found this tiny ramen store in downtown. In a seemingly patched up 2-storey house, a pair of elderly folks run the small eatery replete with signatures on the walls of visitors from all over the world. While they do not speak English, they made every effort to help us order. Very nice folks.

Scenic driving to the mountains & castles

In this journey, we visited three castles. Now if you look at them today, it would seem that they are more decorative than served actual military purposes. With the ornate roofing that one associates with pagodas towering over, we cannot imagine battles with screaming horses charging against the walls.

Hamamatsu castle is such. Set on a small hill, the castle looked more like a manor house belonging to a nobleman, being rather small for size. 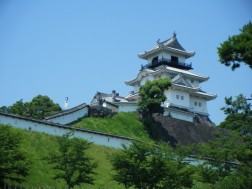 Kakegawa castle on the other hand is substantially larger. It has a small moat in front of it (not around it) and higher walls. Now the castle grounds are free to roam about, but you pay a fee to enter the castle itself. It is large enough to have a courtyard where the workers of the times probably lived.

Taihara castle was set in flowers. In this season, Hydrangeas are blooming all over the castle grounds. While the ruined castle is not much left to see, there remains a series of Tori gates and shrines that must have served its owners during its hey days. While here, good to head up to Mount Zao with its observatory that affords views of the peninsula of Atsumi.

Vey often the castles are set over rivers or near to sources of water. And speaking of rivers, the Shizuoka region is also home to mountains. And so we did our first drive along the so-called “flower route” towards Horaji-san.

Rice fields eventually gave way to tiny country roads which sometimes barely fit two cars side by side. In fact we had came up to a small restaurant here in this remote area which served wild Pheasant.

With rivers come hydro-electric power dams. And as we drove along the small routes (152 and 473), we hugged the riverside with water that seemed smooth as a mirror, reflecting the sides of the hills and sky. Now to keep driving on the smaller roads would be doable if we will be staying in the inns in these parts, but since we need to return to Hamanako, it was a turnaround each time we ventured into the mountains.

Shizuoka is also renowned for its tea. So it is not a surprise to see rows upon rows of the well manicured shrubs on the hillsides in the country. Now only fresh leaves are harvested and the farmers use electric cutters. The plantations are interspersed with poles with small windmills on them.

Research has learned that a too big difference in temperature is not beneficial for the tea. Therefore fans on high poles are placed all over the plantation. These fans move and mix the colder and the warmer air, keeping the temperature more constant. This avoids the risk of frost on the leaves, which would destroy them. What a body of science to cultivate tea! 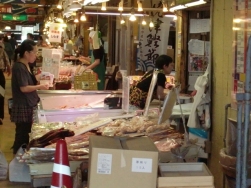 Being so close to the sea, how can we pass up on meeting up with the pacific ocean? The objective of driving to the coast is not just for the scenery but also for the food. And the variety here is so wide that you are spoiled for choice on where to stop!

We drove to Yaizu, where a large market caters to bargain hunters seeking a piece of gourmet from the ocean. It’s like the equivalent of a “wet market” in Singapore, where stallholders display their ware on Styrofoam boxes or trays. In this season, cherry shrimps are the in thing and a definite must to try.

In fact, this is exactly what we did, having an early lunch at one of the tiny restaurants. Not only are the seafood fresh, it was cheap too! For ¥800, the bowl breams with color and aroma. Wash it down with Shizuoka green tea and we were ready for our next destination…

Now Shizuoka is also one of the places from which you can see Mt Fuji from the coast. Near to Shimizu city, there is a stretch of beach which serves as a vantage point to view Mr Fuji. No luck for us this time. As you know, the mountain is often shrouded in clouds and mist. 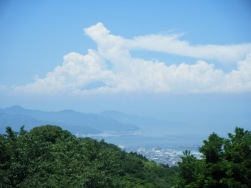 On beautiful days such as we had, the coast of Omaezaki offers fantastic views of the sea along with its iconic lighthouse in the background. A pricier market is also found here and much of the produce has to be kept frozen. So, not buying for us.

We had the time, hence we determined to make it to the end of the Atsumi peninsula that juts out towards Ise. At the Irago hotel, we looked over the entire tip of the peninsula, with ferries coming in from the distant. But wait! Why did we really want to come here? The sweet musk melon of course! 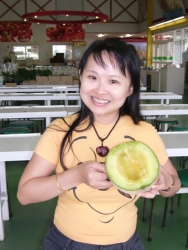 This fruit is harvested during summer and chilled before serving. The melon is cut on the spot for you and we had cold delicious melons for desserts! It was so sweet! At ¥1600 per melon, it was not as expensive as it was in Hokkaido.

Being summer and relatively warmer, you will find people jumping into the waters for a surf. Young people were learning to surf on the waves pounding the shore. Parents were waiting along the shores encouraging their kids to stand up on the surf boards.

Bridges, why the obsession?

During this trip, we drove across bridges, walked on them and admired them.

In the mountains of Horaji, we drove to we took a leisure walk across the bridge over the Tenryu river. The isuka bridge was also a brief stop. Both were painted a nice shade of red.

Did you know that bridges can also be in the Guiness book of records?

Horai bridge is one such structure. Spanning 897m across the delta and river, it is built entirely of wood. The bridge has won accolades andfFor ¥100pp, you can walk the nearly 1km to the other end. It was a pedestrian bridge built in the late 1800s. It is 2.7m wide, making it a comfortable bridge to use. Most parts of the walk way are still made from wood. However, the pillars supporting it are not all original. Pillars out in the river bed are now replaced with concrete structures for safety.

Located about 10 minutes’ drive north of Kawane spa, Shiogo bridge is suspended over the river. You will walk over a house and the Oigawa railway line. At specific intervals, the steam locomotive makes its way along the river. Made with wood planks, it can only accommodate one person at a time. At two parts of the suspension, there are 4 planks to facilitate some standing room.

A series of wire mesh runs along the wood plank path. The whole structure is held up by the two high tension wires running across the river. As you walked on the bridge, you will feel the sway and bounce of each step. For those with fear of heights, this may be an activity to abstain from. Even for those not faint of heart, the sway caused by the person in front can cause a flutter.

Now the accommodations were not all that great, though there was the hot spring bath that sort of made up for it. This journey had cultural and agricultural wonders that it offers such as the vast and beautiful green tea plantations. Would not recommend to drive all the way to Gotemba just to shop unless you really need to. And most of all, we enjoyed the food all the way!