It is no exaggeration to say that the Yellow river is considered the mother river of the Chinese people. Well not exactly only the Chinese people we think, because its wellspring originates high up in the Tibetan plateau west of China proper – as we define it geographically today.

We are in the final leg of our “Silk Road” adventure, one that had taken us across the arid Xinjiang (新疆) province which ended in Lanzhou. From there we had taken a “short cut” in the form of a one-hour flight to Xi’an (西安), the modern successor of the ancient capital of Chang’An (长安). We certainly did not embark on this leg immediately and did a little tour outside of the Xi’an before setting off on the dusty roads of Sha’anxi. To read more of our Xi’an adventures, go to this link. 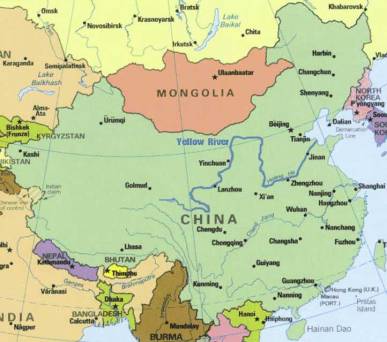 As usual in our essays, we start with a mini geography lesson to help us set the background for this adventure.

The Yellow river (黄河) meanders as rivers do for more than 5400km. It has changed course repeated over the last 3000 years through more than 1500 occurrences of recorded major flooding across northern China plains. It is interesting to know that these were frequently the cause of dynastic power changes, given the massive disruption it will impinge on the population. 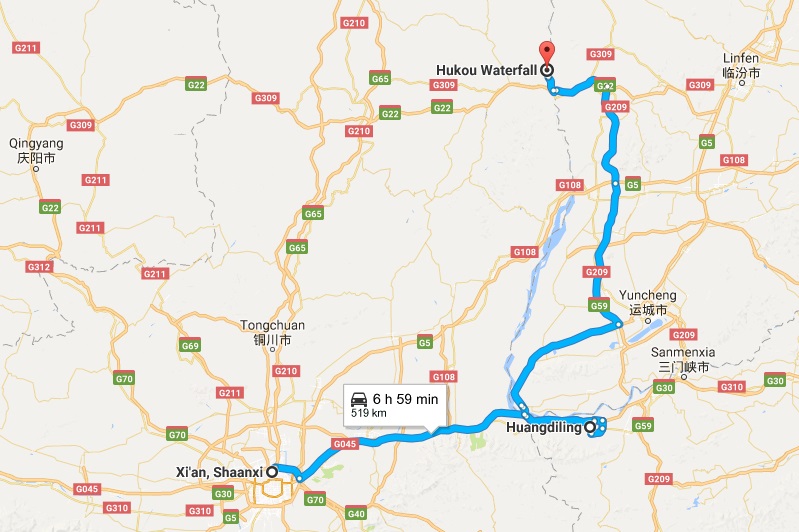 Our adventure was not to trace the entire length of the river, which could on its own be a really attractive idea. Rather, we were seeking to be at the site of the river’s greatest falls. And this was none other than at Hukou (壶口). If one looks at the road map, our journey would take us through approximately 520km of the modern road network.

But, when we did this drive back in 1999, there was no highways yet. Thus, our drive was more of hugging closer to the riverine cliffs that seem to go on forever…

Well come to think about it, the roads are small, and little more than just dirt tracks…which is suppose to accommodate traffic in two directions. Sometimes 2 trucks came up against each other and both have to pass very care-fully…since the one with its side to the cliff would have a steep drop!

In this land that seems to be just foothills of the mountains to the west, there are numerous villages. It was such a surprise when we stopped near an Orchard in seeming middle of nowhere and bought a lot of fruits.

In those days, one RMB could buy a basket full succulent and fresh produce fresh from the orchard! Amazing how folks can eke out a living here. Now you might recall from our essay on the Silk road (here) about cave paintings dedicated to the Buddhist religion. Now imagine lots of caves here, but for dwelling!

Essentially the same as those in Goreme (Turkey, read here), these are homes carved into the hills (called ‘Yadong’ 窯洞). Cloth lines indicate that there are real residents in them. And they appear to have the electricity grid connected to them too! And being in Yan’an (延安), one can see more of them. The communists under Mao were said to have lived in them during the war years when they were holed up in this area.

Our crew made a pit stop at Huangdilin (黄帝陵), where we had a nature break. Why did we stop here? Because this spot is said to be the burial spot of the legendary Yellow Emperor. He is said to have attained immortality and ascended to heaven leaving only his robes behind…

though this spot has been in continuous use for the purpose of venerating this emperor for almost 2500 years. This cult was important to dynastic rulers, who wielded this persona as the basis for powerful centralized state. Thus it is not surprising that even the modern state has gotten into the act to cementing its place as an important cultural monument.

Finally! We have arrived at the small village (then, not now) of Hukou in the late evening. The hotel that we were put up to (we should say guest house) cannot be described… Now we went to bed that night without bathing – it was just too cold and there was no hot water in the shower…one of the few nights when this happens on our travels. Guess we should have seen this coming.

Anyway, the next morning we head out to the falls. This is said to be the Yellow river’s first great rapids. So this is not the first falls of the mighty river. First thing one needs to know is the location of where we were. Yep, we were at the bottom of valley. You do remember that water flows in the path of least resistance right? And that usually means gravitating to the lower(est) point. Hazard to think this might not be the best of place to hide should there be a rage of flooding waters – coming through folks, get out of the way!

Of course while we were there we were like deers looking at headlights.

Just look at the sheer power of the falls! And this our dear friends was when the water level was low. Remember again the path of least resistance…. Heheh, we could also walk all the way to the edge to look over, capture that shot for instagram. Wait! There was no instagram at that time! Obviously it was quite risky (duh) as it there were no safety railings to keep one from slipping and falling over! And trust us when we say the ground was wet. Very.

All this is possible because there is a severe constriction of the river from what you see as wide – to a narrow of 20m across, before the water cliffs over a height of 15m. Like a teapot pouring, hence the name. Only with so much more volume of water concentrated at one point.

We must say that this was worth a whole day’s drive! We cannot think of any other spot that will be able to provide such a view of the Yellow river.

We heard that there were numerous cases of robbers along the small provincial roads back in the day. Fortunately we did not encounter such an experience. And today it is both safer and more accessible than before with the network of highways and rail connection. Get there before the river changes course, again!

This journey took place in October 1998