A treaty port, Tianjin (天津) today is one of the largest cities in China. But it is relatively young city by Chinese standards. Built up as a military garrison city around the early 1400s, the small village was at the intersection of the north and south grand canals before its “promotion”. Come to think of it, the location is rather strategic. And definitely the reason it was selected as an imperial port. But its recent history was far less peaceful.

Because of its location, it was fought over by the imperial powers of the west as the Qing dynasty waned and stumbled to eventual demise in the late 19th century. It has been found with occupation by many foreign powers who built their own enclaves with concessions extracted from a collapsing regime. Thus the city’s heritage goes well beyond that of a ‘normal’ Chinese city. Like its southern counterparts (Shanghai, Hong Kong) and neighbors (Qingdao, Dalian), one may yet find vestiges of a colonial past.

But our journey here was not for sightseeing.

In fact, the whole of four days we barely saw much of the city. Ah, because Mel was on a business trip here and Suan had come along. It was a larger journey that took us to Beijing where we revisited some of the sites we touched many moons ago.

It’s sometimes a wonder how you’d spend 5 long days in a city known more for industry than for its shopping and nightlife. Tianjin is one of those cities. Its restaurants and shops close by 9 pm and there is hardly anyone on the streets after that time. It’s even hard to get a cab! Despite this, Suan managed to eke out a side of the city which a person on business would nothave the opportunity to see. Traditional markets where seafood is sold live, to snack shops where locals and tourists alike sample the wares before buying, Suan experienced it all. 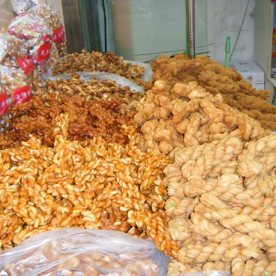 One of the most famous forms of food in Tianjin is said to be a bun 狗不理, roughly translated as ‘Dog does not care’.

As you can see, the buns are rather large and contain generous portions of pork. The story goes that in the city there was a master pastry chef. His nickname happened to “dog” in Chinese, or perhaps his surname sounded similar. Whatever. At one point of time he was so busy, he ignored many pleas from customers or co-workers alike to continue his work. From that time on, the buns he made got the name that is still used today as in these were the buns made by Mr. Gou who does not care.The night lights

Mel on the other hand, was with the corporate group. One place to be was the ancient cultural street (古文化街) where the classical architecture of the Qing dynasty, or at least Tianjin is showcased through a number of shops and restaurants.

They focus mainly on the handicraft though, including lots of places where water colors are sold. Be careful with the prices though if you want to take one home with you!

This street culminates in the Tianhou temple (天后宮), built originally in 1326 and one of only three Mazu (媽祖) temples in the world. Today it is not a formally operating temple, but part of the city’s museum of folk-custom. Little booths facing the river signals the end of the street. Pretty much commercialized, though nice for a little walk through. 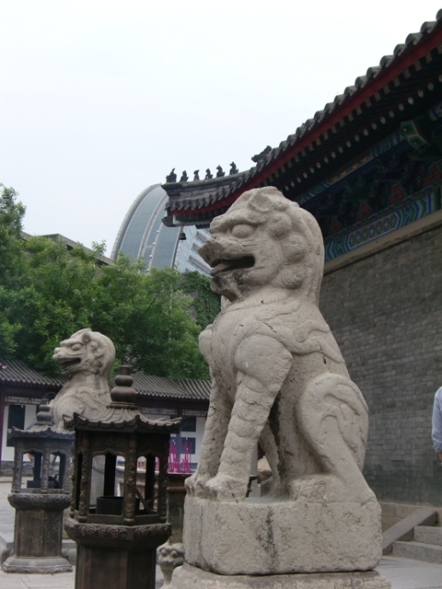 One of the activities large corporates can do is to try your hand at clay making. This tradition harks back centuries and the masters here will demonstrate how this art has been taken to a whole new level.

Of course you can buy them too, but that would not be the point right? Anyhow, it was a fun evening for these senior executives spending two hours trying to make something with the lumps of clay.

Bear in mind these are the raw product that has not been ‘fired’ (oh what a word to use for these folks), so it may not be all glitzy, yet.

They had dinner at a restaurant (Huayun), whose owners had assembled a vast array of collectible antiques. It was a quaint place to have a meal and be able to learn about old China at the same time. This Cantonese style dining establishment is filled to the brim with artifacts. It is also Tianjin’s first private museum and not a place to miss! From old cannons to stone carvings, one can enjoy a little tour prior to having one’s meal. And this is not all of them! The owner is said to have set up three museums in total to showcase his 3000+ pieces that he owns.

A trip on the river at night is really how one can witness how the city has transformed. One of the highlights is the Tianjin Ferris wheel – also known as the Tianjin “eye”. Opened in 2008, it is located near the Yongle bridge north of the old town area. And as the cruise made its way southwards, one comes up against the magnificent architecture left behind by the concession masters. While one can explore the place in the day, it is in the evenings that one can admire their majesty.

Today though, there are also very modernist building interspersing these old dames of the city. All reminders that China is on the march towards a modernity. Hopefully without losing too much of the heritage that it has inherited.

Fancy a journey to Tianjin?

This journey took place in May 2011